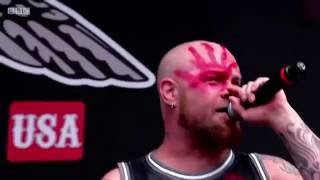 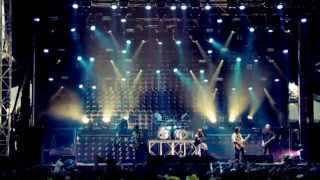 
Five Finger Death Punch, also abbreviated as 5FDP or FFDP, is an American heavy metal band from Las Vegas, Nevada. Formed in 2005, the band's name comes from kung fu cinema. The band originally consisted of vocalist Ivan Moody, guitarist Zoltan Bathory, guitarist Caleb Andrew Bingham, bassist Matt Snell, and drummer Jeremy Spencer. Bingham was replaced by guitarist Darrell Roberts in 2006, who was then replaced by Jason Hook in 2009. Bassist Matt Snell departed from the band in 2010, and was replaced by Chris Kael in 2011. Spencer then departed the band in 2018 due to re-occurring back issues, and was replaced by Charlie Engen, making Bathory and Moody the only original members of the band.


Five Finger Death Punch's debut album The Way of the Fist was released in 2007, which began achieving rapid success and selling over 500,000 copies in the United States. The 2009 follow-up album War Is the Answer further increased their popularity, selling over 1,000,000 copies and got certified Platinum by the RIAA, the band's third album, American Capitalist, was released on October 11, 2011, and achieved Gold status within the year. The following three albums—The Wrong Side of Heaven and the Righteous Side of Hell, Volume 1 , The Wrong Side of Heaven and the Righteous Side of Hell, Volume 2 , and Got Your Six —have all been certified Gold, making Five Finger Death Punch one of the most successful heavy metal bands of the decade. The band has played international music festivals including Mayhem Festival in 2008, 2010 and 2013, and Download Festival in 2009, 2010, 2013, 2015, and 2017. The band released their seventh studio album, And Justice for None, in 2018.


Five Finger Death Punch was founded in 2005 by former U.P.O. bassistZoltan Bathory and drummer Jeremy Spencer, Zoltan deriving the band's name from classic martial arts cinema. Bassist Matt Snell joined in early 2006. Later that year, Bathory contacted former Motograter vocalist Ivan Moody, sending him some of the material the band had recorded and asked him to audition for the vocalist position. Moody flew from his home in Denver, Colorado to Los Angeles and quickly began recording material with the band.


By the end of 2006, their debut album, The Way of the Fist had been recorded and entirely self-produced. The album was recorded with Stevo "Shotgun" Bruno and Mike Sarkisyan and was mixed by guitarist Logan Mader. After searching for a second guitarist, they found Caleb Bingham who played some shows with the band, but was later replaced by Darrell Roberts. Shortly after recording the album, they signed a record deal with Firm Music, a branch of "The Firm". On July 10, 2007, they released an EP, Pre-Emptive Strike exclusively through the American iTunes Store. The album's lead single, "The Bleeding", was released on July 13, 2007.The Way of the Fist was released on July 31, 2007. The album entered the Billboard 200 at number 199 and was certified gold in 2011.


From July 30 – September 2, 2007, the band went on their first major tour cycle as one of the supporting acts on Korn's Family Values Tour. They were also a supporting act of the North American leg of Korn's Bitch We Have a Problem Tour from September 22 – October 27, 2007. They were set to tour with Chimaira and All That Remains from January through March 2008, but due to singer Moody developing cysts on his vocal cords they were forced to pull out. He made a full recovery and they began to tour again. They supported Disturbed on their Indestructible US Tour from April through May 2008.


This article uses material from the Wikipedia article "Five Finger Death Punch", which is released under the Creative Commons Attribution-Share-Alike License 3.0.