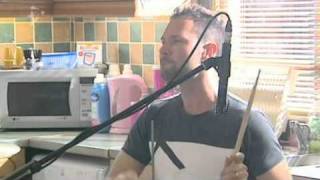 
Elliot John Gleave , better known by his stage name Example, is an English musician, singer, rapper, songwriter and record producer. His name arose due to his initials being E.G., which is an abbreviation of the Latin phrase exempli gratia .


Elliot John Gleave was born at West London Hospital in Hammersmith to Elaine and Michael Gleave. In a 2012 interview with The Guardian, he was stated to have Asperger syndrome, attention deficit hyperactivity disorder and obsessive compulsive disorder. He said "I was diagnosed with Asperger's when I was younger. I was amazing with numbers, I had a photographic memory, and I hated reading fiction, preferring books on nature and history. All symptoms of mild autism." He has a younger sister, named Elise. He later went on to attend ADT College in Putney. Example has claimed in interviews that the main reason he started rapping was due to his introduction to hip-hop through albums by Wu-Tang Clan and Snoop Dogg – the latter's album purchased primarily for "the cool cover art", and to the fact that he was not particularly good at any sports, so started rapping to fit in socially. His first experience of rapping was through a rap battle at a house party in Shepherd's Bush in 1994, when he was 12 years old. In that battle, he, in his own words, "completely destroyed a useless wanker and a fight broke out so sprinted home".