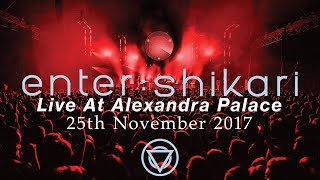 
Enter Shikari are a British rock band formed in St Albans, Hertfordshire, England in 1999 by bassist Chris Batten, lead vocalist and keyboardist Rou Reynolds, and drummer Rob Rolfe. In 2003, guitarist Rory Clewlow joined the band to complete its current lineup, and it adopted its current name. In 2006, they performed to a growing fanbase at Download Festival as well as a sold-out concert at the London Astoria. Their debut studio album, Take to the Skies, was released in 2007 and reached number 4 in the Official UK Album Chart, and has since been certified gold in the UK. Their second, Common Dreads, was released in 2009 and debuted on the UK Albums Chart at number 16; while their third, A Flash Flood of Colour, was released in 2012 and debuted on the chart at number 4. Both have since been certified silver in the UK. The band spent a considerable amount of time supporting the latter release through the A Flash Flood of Colour World Tour, before beginning work on a fourth studio album, The Mindsweep, which was released in 2015. Their fifth studio album The Spark was released in 2017. Their sixth album Nothing Is True & Everything Is Possible was released in April 2020.


Enter Shikari have their own record label, Ambush Reality. However, they have also signed distribution deals with several major labels to help with worldwide distribution. Their eclectic musical style combines influences from rock music genres with those from various electronic music genres.


In 1999 a band named Hybryd formed, consisting of Rou Reynolds on guitar and vocals, Chris Batten on bass guitar, and Rob Rolfe on drums. They released an EP called Commit No Nuisance, which featured the tracks "Perfect Pygmalion", "Look Inside", "Torch Song", "Honesty Box" and "Fake". In 2003, with the addition of guitarist Rory Clewlow, Hybryd became Enter Shikari. The band was named after Shikari, a boat belonging to vocalist Rou Reynolds' uncle. "Shikari is a Hindi word for hunter." After the band's lineup and name change, Reynolds focused his musical efforts on vocals and electronics instead of guitar.


During 2003 and 2004, the band released three demo EPs that were available from their gigs and their website, featuring original versions of some songs that were eventually rerecorded for their debut album, Take to the Skies. They had another demo EP planned for release in 2005 . For this the first versions of "Return To Energiser" and "Labyrinth" were recorded. Early versions of "OK Time for Plan B" and "We Can Breathe in Space" were also recorded around this time but it's unclear if these were destined for the EP. It was at this time that Kerrang! Radio's Alex Baker picked up on the band, and as he didn't have a physical release to play, he streamed "OK Time For Plan B" off the band's Myspace page, straight onto the airwaves.


They also had interviews with popular music press such as Kerrang! and Rock Sound. On 4 November 2006, they became only the second unsigned band to ever sell out London Astoria .


This article uses material from the Wikipedia article "Enter Shikari", which is released under the Creative Commons Attribution-Share-Alike License 3.0.