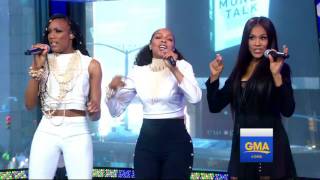 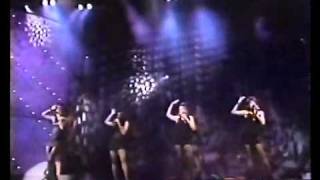 En Vogue is an American R&B/pop vocal group whose original lineup consisted of singers Terry Ellis, Dawn Robinson, Cindy Herron, and Maxine Jones. Formed in Oakland, California, in 1989, En Vogue reached No. 2 on the US Hot 100 with the single "Hold On", taken from their 1990 debut album Born to Sing. The group's 1992 follow-up album Funky Divas reached the top 10 in both the US and UK, and included their second US number two hit "My Lovin' " as well as the US top 10 hits "Giving Him Something He Can Feel" and "Free Your Mind".


In 1996, "Don't Let Go " became the group's third, and most successful single, to reach number two in the US, and became their sixth number one on the US R&B chart. Robinson left the group in 1997 shortly before the release of their third album EV3, which reached the US and UK top 10. Jones left the group in 2001, Amanda Cole joined shortly thereafter. However, in 2003, Cole left the group, and Rhona Bennett joined the group during the recording of their album Soul Flower. In 2005, the original members briefly united before disassembling again. In 2009, the original members once again reunited for their "En Vogue: 20th Anniversary". Shortly after the tour, Robinson and Jones again departed from En Vogue, with Bennett rejoining the group as a trio.


En Vogue has sold more than 30 million records worldwide to date, and are often considered one of the best female vocal groups of all time. The group has won seven MTV Video Music Awards, three Soul Train Awards, two American Music Awards, and received seven Grammy nominations. In December 1999, Billboard magazine ranked the band as the 19th most successful recording artist of the 1990s. They ranked as the second most successful female group of the 1990s. In March 2015, Billboard magazine named the group the ninth most-successful girl group of all-time. Two of the group's singles ranks in Billboard's most successful girl group songs of all-time list, "Don't Let Go " and "Hold On" .


In the late-1980s, when they were assembling their 1988 compilation project FM2 for Atlantic Records, Oakland-based production and songwriting duo Denzil Foster and Thomas McElroy first conceived the idea of a modern-day girl group in the tradition of commercially successful female bands that flourished in the late 1950s and early 1960s . Foster and McElroy envisioned an entertainment unit with interchangeable but not identical parts in which every member would qualify to take the lead vocals on any given number. Thus, their plan was to recruit singers who possessed strong voices, noticeably good looks, and intelligence. Approximately 3,000 women attended the auditions held in 1988, with Dawn Robinson, Cindy Herron, and Maxine Jones making the final cut. Originally conceived as a trio, Foster and McElroy decided to create a quartet after hearing the audition of Terry Ellis whose plane had been late from Houston, Texas. At first, they selected the band name 4-U but soon shifted to Vogue, ultimately settling on En Vogue, upon learning that another group had already claimed the Vogue name.


After forming, the group began working with their producers on their debut album. Recording began in August 1989 and wrapped up in December of the same year.Born to Sing was released on April 3, 1990. The album peaked at No. 21 on the Billboard 200 chart and No. 3 on Billboard's R&B Albums Chart. The first single, "Hold On," was released to radio in late February 1990 and became a crossover pop hit, reaching No. 2 on the Billboard Hot 100 singles chart, and No. 1 on both the R&B singles and Hot Dance Music/Club Play charts. It later went to No. 5 in the UK and became a hit in Europe. The next two singles, "Lies" and "You Don't Have to Worry," each went to No. 1 on the Billboard R&B charts, while the fourth and final single, "Don't Go," charted at No. 3 on the Billboard R&B. The album was later certified triple platinum by the RIAA.


"Hold On" was awarded a Billboard Music Award for "#1 R&B Single of the Year," a Soul Train Award for R&B/Urban Contemporary Single of the Year, Group, Band or Duo and have been nominated for a Grammy Award for Best R&B Vocal Performance by a Duo or Group. In 1990, En Vogue signed an endorsement deal to appear in a Diet Coke commercial directed by Spike Lee.


En Vogue's second album, Funky Divas, was released in the spring of 1992. The album debuted at No. 8 on the Billboard 200 and No. 1 on the Billboard R&B and ultimately doubled the take of its predecessor, going multi-platinum. The album's first two singles: "My Lovin' " and "Giving Him Something He Can Feel" both went top 10 and peaked at No. 1 on the R&B charts. The next single, "Free Your Mind" also went top 10. The final two singles "Give It Up Turn It Loose" and "Love Don't Love You" both were top 40 hits.


This article uses material from the Wikipedia article "En Vogue", which is released under the Creative Commons Attribution-Share-Alike License 3.0.