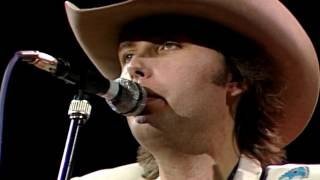 Dwight Yoakam at the Stagecoach 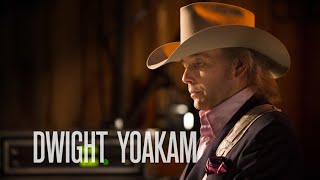 
Dwight David Yoakam is an American singer-songwriter, musician, and actor, known for his pioneering style of country music. First becoming popular in the mid-1980s, Yoakam has recorded more than 20 albums and compilations, charted more than 30 singles on the Billboard Hot Country Songs charts, and sold more than 30 million records. He has recorded five Billboard No. 1 albums, twelve gold albums, and nine platinum albums, including the triple-platinum This Time.


In addition to his many achievements in the performing arts, he is also the most frequent musical guest in the history of The Tonight Show.


Dwight Yoakam was born on October 23, 1956, to Ruth Ann , a key-punch operator, and David Yoakam, a gas-station owner. He was born in Pikeville, Kentucky, but was raised in Columbus, Ohio, where he graduated from Northland High School in 1974. During his high school years, he took part in both the music and drama programs, having been cast in lead roles for the school's plays, including "Charlie" in Flowers for Algernon. Outside of school, Yoakam sang and played guitar with local garage bands.


He briefly attended The Ohio State University, but dropped out and moved to Los Angeles in 1977 with the intent of becoming a recording artist. On May 7, 2005, Ohio Valley University in Parkersburg, West Virginia, awarded and presented Yoakam with an honorary doctorate.


When he began his career, Nashville was oriented toward pop "urban cowboy" music, and Yoakam's brand of hip honky tonk music was not considered marketable.


Not making much headway in Nashville, Yoakam moved to Los Angeles and worked towards bringing his particular brand of new honky tonk or "hillbilly" music forward into the 1980s. Writing all his own songs, and continuing to perform mostly outside traditional country music channels, he did many shows in rock and punk rock clubs around Los Angeles, playing with roots rock or punk rock acts like The Blasters , Los Lobos, and X. This helped him diversify his audience beyond the typical country music fans, and his authentic, honky-tonk revivalism brought rock audiences closer to country music.


This article uses material from the Wikipedia article "Dwight Yoakam", which is released under the Creative Commons Attribution-Share-Alike License 3.0.