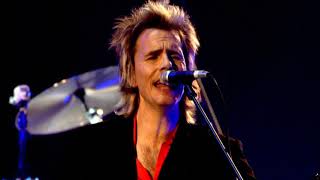 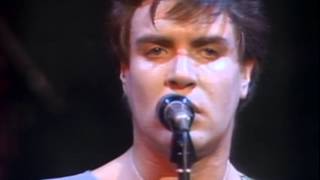 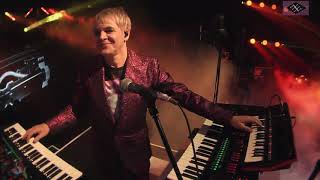 
Duran Duran are an English new wave band formed in Birmingham in 1978. The group was a leading band in the MTV-driven Second British Invasion of the US in the 1980s. The group was formed by keyboardist Nick Rhodes and bassist John Taylor, with the later addition of drummer Roger Taylor, and after numerous personnel changes, guitarist Andy Taylor and lead singer Simon Le Bon. These five members featured the most commercially successful line-up.


When Duran Duran emerged they were generally considered part of the New Romantic scene, along with bands such as Spandau Ballet and Visage. The video age catapulted Duran Duran into the mainstream with the introduction of the 24-hour music channel MTV. Many of their videos were shot on 35 mm film, which gave a much more polished look than was standard at the time. They also collaborated with professional film directors to take the quality a step further, often teaming up with Australian director Russell Mulcahy for some of their most memorable video offerings. In 1984, the band was an early innovator with video technology in its live stadium shows. The band was one of the most successful acts of the 1980s, though by the end of the decade, membership and music style changes challenged the band before a resurgence in the early 1990s.


The group has never disbanded, but after the departures of Andy and Roger Taylor in 1986, the line-up changed to include two American musicians: former Missing Persons guitarist Warren Cuccurullo from 1989 to 2001 and drummer Sterling Campbell from 1989 to 1991. The reunion of the original five members in the early 2000s created a stir among the band's fans and music media. Andy Taylor left the band once again in mid-2006, and then guitarist Dominic Brown worked with the band as a session player and touring member.


Duran Duran has sold over 100 million records, making them one of the world's best-selling music artists. They achieved 30 top 40 singles in the U.K., 14 singles in the top 10 of the UK Singles Chart and 21 in the US Billboard Hot 100. The band have won numerous awards throughout their career: two Brit Awards including the 2004 award for Outstanding Contribution to Music, two Grammy Awards, an MTV Video Music Award for Lifetime Achievement, and a Video Visionary Award from the MTV Europe Music Awards. They were also awarded a star on the Hollywood Walk of Fame.


John Taylor and Nick Rhodes formed Duran Duran in Birmingham, England, in 1978, where they became the resident band at the city's Rum Runner nightclub. They were doing jobs at the club, John working the door and Nick deejaying for £10 a night. They began rehearsing and regularly playing at the venue. There were many nearby nightclubs where bands such as the Sex Pistols and the Clash played gigs; the most significant was called Barbarella's. They went on to name the band after "Dr. Durand Durand", Milo O'Shea's character from the sci-fi film Barbarella.


The band's first singer was Stephen Duffy. Simon Colley soon joined Taylor, Rhodes and Duffy. Colley was the band's original bass player, as John Taylor was the guitarist at this point. This was the first complete line-up of the band that played live shows. For percussion, an electronic drum machine belonging to Rhodes was used. After Duffy left Duran Duran early in 1979, a few guitarists were auditioned, mostly unsuccessfully, as well as a handful of vocalists. Andy Wickett, brought on in 1979 as lead vocalist, had a major part in the writing of "Girls on Film" during his tenure with the band, according to Andy Taylor's autobiography. Wickett is featured on the demos that were presented to EMI in 1980. According to both Wickett's and John Taylor's websites, Wickett co-wrote an early version of the song that came to be known as "Rio". Upon Colley's and Wickett's departures, the band enlisted singer Jeff Thomas and guitarist Alan Curtis, each for only a relatively brief period.


This article uses material from the Wikipedia article "Duran Duran", which is released under the Creative Commons Attribution-Share-Alike License 3.0.