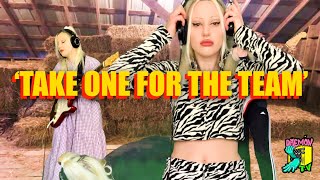 Du Blonde - 'Take One For The Team' Live 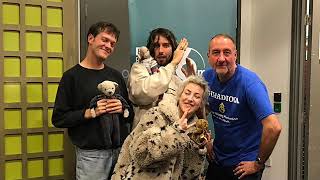 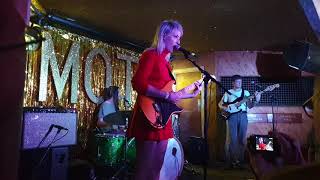 
Beth Jeans Houghton was born in Newcastle upon Tyne, England. Houghton started writing songs in their teens. At sixteen they left school and bought a Fender Stratocaster, which they taught themself to play.


Houghton first appeared in front of an audience in 2006; their debut release, titled EP , was on Bird Records in 2008. They signed then with Static Caravan Recordings, which released the single "Golden"/"Nightswimmer", produced by Adem, and her second EP, Hot Toast, Vol. 1 , both of which earned acclaim from the UK press. Houghton signed in early 2011 with Mute Records, releasing their debut long-player, Yours Truly, Cellophane Nose in early 2012. The album was recorded with Ben Hillier whose previous production credits include Blur, Depeche Mode and Elbow.


Yours Truly, Cellophane Nose by Beth Jeans Houghton and the Hooves of Destiny was released on 6 February 2012, and reached number 83 in the UK Albums Chart.


Houghton and the Hooves of Destiny toured the UK and Europe extensively during 2011 and 2012, appearing at multiple festivals including Glastonbury, The Great Escape, Latitude and Bestival. In April 2012, the band performed on Later... with Jools Holland alongside Paul Weller and Willis Earl Beal.


After touring supporting Welcome Back To Milk, Houghton began work on issue 1 of their comic books series 'Butt Hurt', focusing on bringing to life their vivid dreams and uncomfortable social situations. Having been a lifelong sufferer of anxiety, Houghton's work often touches upon discomfort, using humour to help ease their symptoms and dispel stigma surrounding mental health.


This article uses material from the Wikipedia article "Du Blonde", which is released under the Creative Commons Attribution-Share-Alike License 3.0.