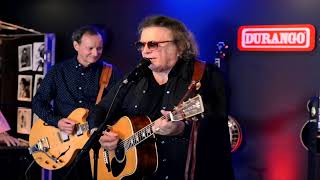 Don McLean Live at The 615 Hideaway! 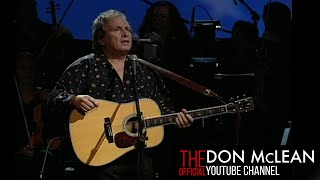 
Donald McLean III is an American singer-songwriter and guitarist. He is best known for his 1971 hit song "American Pie", an eight-and-a-half-minute folk rock "cultural touchstone" about the loss of innocence of the early rock and roll generation. His other hit singles include "Vincent" , "Dreidel", and "Wonderful Baby"; as well as his renditions of Roy Orbison's "Crying" and the Skyliners' "Since I Don't Have You".


McLean's composition "And I Love You So" has been recorded by Elvis Presley, Perry Como, Helen Reddy, Glen Campbell, and others. In 2000, Madonna had a hit with a rendition of "American Pie".


In 2004, McLean was inducted into the Songwriters Hall of Fame. In January 2018, BMI certified that "American Pie" and "Vincent" had reached five million and three million airplays respectively.


McLean's grandfather and father, both also named Donald McLean, were of Scottish origin. McLean's mother, Elizabeth Bucci, was Italian, originated from Abruzzo in central Italy. He has other extended family in Los Angeles and Boston.


Though some of his early musical influences included Frank Sinatra and Buddy Holly, as a teenager, McLean became interested in folk music, particularly the Weavers' 1955 recording At Carnegie Hall. He often missed long periods of school because of childhood asthma, particularly music lessons, and although McLean slipped back in his studies, his love of music was allowed to flourish. By age 16, he had bought his first guitar and began making contacts in the music business, becoming friends with the folk singers Erik Darling and Fred Hellerman of the Weavers. Hellerman said, "He called me one day and said, 'I'd like to come and visit you', and that's what he did! We became good friends — he has the most remarkable music memory of anyone I've ever known."


When McLean was 15, his father died. Fulfilling his father's request, McLean graduated from Iona Preparatory School in 1963, and briefly attended Villanova University, dropping out after four months. After leaving Villanova, McLean became associated with the famed folk music agent Harold Leventhal for several months before teaming up with his personal manager, Herb Gart, for 18 years. For the next six years, he performed at venues and events including The Bitter End and the Gaslight Cafe in New York, the Newport Folk Festival, the Cellar Door in Washington, D.C., and the Troubadour in Los Angeles. Gart's 18-year tenure as McLean's manager ended acrimoniously in the 1980s. Following Gart's death in September 2018, McLean wrote:


This article uses material from the Wikipedia article "Don McLean", which is released under the Creative Commons Attribution-Share-Alike License 3.0.