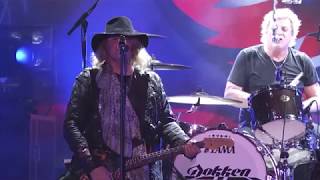 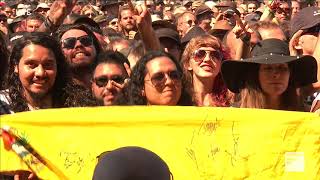 
Dokken is an American glam metal band formed in Los Angeles in 1979. It split up in 1989 and reformed four years later. The band had several hit singles which charted on the Billboard Hot 100, such as "Alone Again", "In My Dreams", and "Burning Like a Flame", and have sold more than 10 million albums worldwide. The live album Beast from the East was nominated for the inaugural Grammy Award for Best Metal Performance in 1989.


The classic Dokken line-up consisted of founder Don Dokken on vocals, George Lynch on lead guitar, Mick Brown on drums and Jeff Pilson, who replaced the Ratt-bound Juan Croucier in 1983, on bass; this line-up remained stable from 1983 to 1989, and again from 1993 to 1998, and briefly reunited in 2016. After several personnel changes on guitar, Dokken's attorney Jon Levin stepped in to fill the role in 2004. In 2001, Barry Sparks replaced Pilson on bass. In 2009, Sean McNabb replaced him, and was then replaced by Chris McCarvill in 2015. As of Mick Brown's retirement from the band in July 2019, Don Dokken is the only remaining original band member. Brown's vacancy was filled by BJ Zampa of House of Lords fame.


Don Dokken's first band formed in 1976, named Airborn. He played shows at clubs in the Los Angeles area, including the Starwood on Sunset Strip. Airborn included Bobby Blotzer on drums and Juan Croucier on bass, but Blotzer and Croucier left the band in 1978 to form FireFoxx. Don Dokken was unable to keep the Airborn name because another band named Airborne had already acquired a record deal. Bringing in Greg Pecka on drums and Steven R. Barry on bass, Dokken recorded a 7" single, "Hard Rock Woman" b/w "Broken Heart", released in 1979 under the band name Dokken, produced by Drake Levin, best known as the guitarist for Paul Revere & the Raiders.


A Dokken line-up consisting of Don, guitarist Greg Leon, drummer Gary Holland , and bassist Gary Link toured Germany in 1979 where the band met an up-and-coming producer by the name of Michael Wagener, also the live sound engineer for Accept, who would follow Don back to Los Angeles for a short vacation, a move that became permanent shortly thereafter. The '79 touring line-up quickly fell apart with Leon taking over Randy Rhoads' spot in Quiet Riot and Holland joining Dante Fox, later known as Great White. A Michael Wagener-produced Hamburg recording of the '79 line-up surfaced in 1989 under the title Back in the Streets, released by the German label Repertoire Records without the band's consent. Dokken toured Germany again in 1980, this time with Croucier back on bass.


In early 1981, Don Dokken returned to Germany trying to get a record deal with a new band in tow, guitarist George Lynch and drummer Mick Brown, who had been playing in a band called Xciter at the time, with Croucier remaining on bass. After recording demos with Wagener and with the help of Accept's manager, Gaby Hauke, a deal was secured with Carrere Records. Recorded between July and September 1981 at Studio Stommeln with Wagener and Dieter Dierks, Breaking the Chains was initially released under the name "Don Dokken" before it was changed to simply Dokken on subsequent pressings. While in Germany, Don would also demo songs with the Scorpions for their Blackout album as the band's vocalist Klaus Meine was forced to undergo surgery on his vocal cords and his return was uncertain for a time. Dokken did eventually perform backing vocals on the album. Meanwhile, Lynch, Brown and Croucier ended up working as studio musicians for German singer Udo Lindenberg on his 1982 album Keule, playing on four songs: "Urmensch ", "Ratten " , "Zwischen Rhein Und Aufruhr ", and "Gesetz ". Promotional activities for the European release of Breaking the Chains included a German TV appearance as Dokken performed a 40-minute live set on the Beat-Club as part of a Musikladen Extra which aired on January 4, 1982.


Back in the United States, Dokken were now managed by Cliff Bernstein who got the band signed to Elektra Records for a stateside release of Breaking The Chains, remixed for the American market. The band did an arena tour in the U.S. supporting Blue Öyster Cult in 1983, but when the tour was over the band was left with little money and was nearly dropped from the label due to the album's lack of success.


This article uses material from the Wikipedia article "Dokken", which is released under the Creative Commons Attribution-Share-Alike License 3.0.