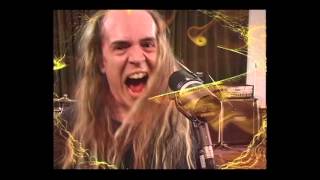 
Devin Garrett Townsend is a Canadian singer, songwriter, musician, and record producer. He founded extreme metal band Strapping Young Lad and was its primary songwriter, vocalist, and guitarist from 1994 to 2007. He has also had an extensive solo career and has released a total of 25 albums across all of his projects as of 2020.


After performing in a number of heavy metal bands in high school, Townsend was discovered in 1993 by a record label who asked him to perform lead vocals on Steve Vai's album Sex & Religion. After recording and touring with Vai, he was discouraged by what he found in the music industry and vented his anger on his 1995 solo album Heavy as a Really Heavy Thing, which he released under the pseudonym Strapping Young Lad. He soon assembled a band of the same name, with whom he released the critically acclaimed album City in 1997. Since then, he has released three more studio albums with Strapping Young Lad, along with solo material released under his own independent HevyDevy Records label.


Townsend's solo albums have featured a varying lineup of supporting musicians and are a mix of hard rock, progressive metal, ambient, and new-age. In 2002, he formed the Devin Townsend Band, which recorded and toured for two of his solo releases. In 2007, he disbanded both Strapping Young Lad and the Devin Townsend Band, taking a break from touring to spend more time with his family. After a two-year hiatus, he began recording again and soon announced the formation of the Devin Townsend Project. This band began with a series of four albums, released from 2009 to 2011 and each written in a different genre. Townsend continued to record and tour under the new moniker until January 2018.


Across all his bands and solo projects, Townsend has released 23 studio albums and four live albums. His trademark production style, featuring a heavily multi-tracked wall of sound, has been compared to the styles of Robert Fripp and Frank Zappa. His vocal delivery ranges from screaming to an opera-esque singing, while his musical style is rooted in metal and his albums are written to express different aspects of his personality.


Devin Garrett Townsend was born in New Westminster on May 5, 1972. He picked up the banjo when he was five and began playing guitar when he was 12. As a young teenager, he befriended Brian "Beav" Waddell, who would later play guitars as part of the Devin Townsend Band and bass on the Devin Townsend Project. He participated in several metal bands while he was in high school, and founded Grey Skies at the age of 19. Around the same time he joined a popular local group called Caustic Thought, replacing Jed Simon on guitar and playing alongside bassist Byron Stroud, both of whom would later become members of Townsend's flagship band, Strapping Young Lad. In 1993, Townsend began writing material under the name Noisescapes, a project he later described as "just as violent as Strapping Young Lad".


Townsend recorded a Noisescapes demo and sent copies to various record labels. Relativity Records responded to Townsend with a record deal and Townsend began work on what was to be the first Noisescapes album, Promise. Shortly afterward, the label introduced him to musician Steve Vai. Impressed with Townsend's vocal work, Vai offered him the role of the lead vocalist on his new album Sex & Religion. After recording Sex & Religion, Townsend accompanied Vai on a world tour in support of the album. Townsend soon landed a second tour, this time with the opening band of Vai's tour, the Wildhearts. He played live with the band throughout half of 1994 in Europe, and appeared as a guest musician on their single Urge. Ginger, the band's frontman, remained close friends with Townsend, later co-writing several songs on Infinity and the Christeen + 4 Demos EP.


This article uses material from the Wikipedia article "Devin Townsend", which is released under the Creative Commons Attribution-Share-Alike License 3.0.