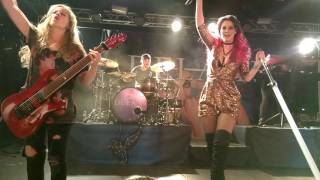 Delain is a Dutch symphonic metal band formed in 2002 by former Within Temptation keyboardist Martijn Westerholt, and Charlotte Wessels. The name of the band comes from the Kingdom of Delain in Stephen King's novel, The Eyes of the Dragon.


In 2002, Westerholt formed Delain, after he was forced to leave Within Temptation due to Pfeiffer's disease. In the same year, they independently released the demo Amenity. After the demo, Westerholt temporarily left the project behind but continued to write music.


In 2005, he joined with Charlotte Wessels, and was signed to Roadrunner Records. At the time, the band was envisioned as a musical project featuring a host of guest musicians, and not as a live band.


Despite many delays, Lucidity was released in September 2006, to generally positive reviews. The album spawned three singles: Frozen, See Me In Shadow and The Gathering, and the response to the album allowed Delain to tour in support in the Netherlands and neighbouring countries. Rob van der Loo, Ronald Landa and Sander Zoer were added on bass, guitar and drums respectively to round out the live band.


At the end of 2007, Delain announced that they were working on their second album. New songs from the album – "Stay Forever" and "Start Swimming" – were added to the band's setlist in early 2008. Their second album, April Rain was released on February 9, 2009. The lead single was the title track, "April Rain", followed by "Stay Forever". The band toured extensively in support of the album, visiting many new countries such as the United States and Mexico, as well as performing at high-profile festivals in Europe, including Hellfest, Lowlands, Wacken Open Air and Sonisphere. In February 2010, Delain announced they had started working on their third album, and that bassist Rob van der Loo would leave the band the same year due to time constraints. In March, Otto Schimmelpenninck van der Oije was announced as Rob's successor. On October 4, 2010, Delain announced they were to part company with guitarist Ewout Pieters. Timo Somers was announced as his replacement on April 17, 2011.


During their 2011 live shows, Delain debuted three new songs — "Manson" , "Get the Devil Out of Me" and "Milk and Honey" — from their third album, We Are the Others. In an interview with Sonic Cathedral, Wessels discussed the inspiration she drew from the Sophie Lancaster case:


This article uses material from the Wikipedia article "Delain", which is released under the Creative Commons Attribution-Share-Alike License 3.0.