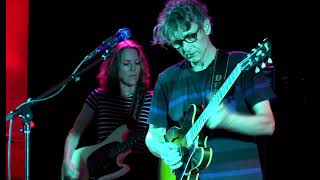 
Dean Wareham is an American musician and actor who formed the band Galaxie 500 in 1987. He left Galaxie 500 in April 1991 and founded the band Luna. Since Luna's breakup in 2005, Wareham has released albums with fellow Luna bandmate Britta Phillips . They also work as film composers, notably on the Noah Baumbach films The Squid and the Whale and Mistress America. He released a self-titled album in 2014 and reformed Luna in 2015.


Born in Wellington, New Zealand, Wareham is the son of John Wareham, author, and Margaret Wareham . His family moved to Sydney, Australia, before settling in New York City in 1977. Wareham attended the Dalton School in New York and Harvard University, graduating with a B.A. in social studies. He has three siblings, including Louise Wareham, a novelist.


Guitarist Wareham, drummer Damon Krukowski and bassist Naomi Yang began playing together as Galaxie 500 in 1987, after their time as students at Harvard University. The band's name comes from a Ford car of the 1960s, the Ford Galaxie 500. Galaxie 500's records were released in the US and UK on the independent Rough Trade label and went out of print upon Rough Trade's demise. Galaxie 500's entire catalog, along with a box set including singles, EPs and rarities was reissued during the 1990s by Rykodisc.


Galaxie 500 leveraged fairly minimal instrumental technique with intense atmospherics provided by producer Mark Kramer, and their distinctive sound bore an influence beyond the small audience for their independently released albums. The sound and the increasingly loyal audience grew with each release until Wareham quit the band in 1991. To mark twenty years since the release of the Galaxie 500 albums, Wareham embarked on his Dean Wareham Plays Galaxie 500 tour. Notably absent were Krukowski and Yang.


Luna was a dream pop/indie pop band Wareham formed in 1991 after the breakup of Galaxie 500, with Stanley Demeski and Justin Harwood .


The original lineup was expanded with the addition of guitarist Sean Eden for their second album, 1994's Bewitched. Lee Wall replaced Demeski on drums in time for 1997's Pup Tent, and Britta Phillips of Belltower joined when bassist Justin Harwood departed in 2000. Phillips and Wareham eventually became romantically involved and married. They now release records under the moniker "Dean & Britta".


This article uses material from the Wikipedia article "Dean Wareham", which is released under the Creative Commons Attribution-Share-Alike License 3.0.