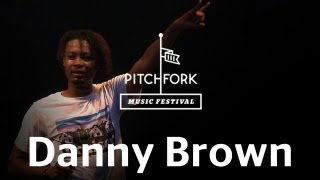 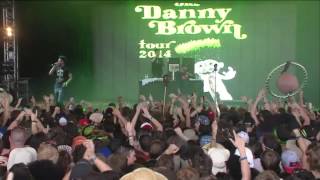 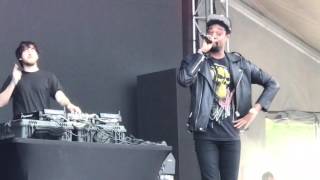 
Daniel Dewan Sewell , known professionally as Danny Brown, is an American rapper and songwriter. He is described by MTV as "one of rap's most unique figures in recent memory".


In 2010, after amassing several mixtapes, Brown released his debut studio album, The Hybrid. Brown began to gain major recognition after the release of his second studio album, XXX, which received critical acclaim and earned him such accolades as Spin, as well as Metro Times "Artist of the Year". In 2013, he entered a US Billboard chart, with the release of his third studio album, Old, which reached number 18 on the US Billboard 200 chart and spawned three singles, "Dip", "25 Bucks" and "Smokin & Drinkin”, which peaked at number 31 on the Top R&B/Hip-Hop songs chart. His fourth studio album, Atrocity Exhibition, was released on September 27, 2016 and his fifth studio album, U Know What I'm Sayin?, was released on October 4, 2019.


Sewell was born in Detroit, Michigan on March 16, 1981. At the time, his mother was 18 and his father was 16. His father is half Filipino. Brown's talent for rhyming came at a very young age, as his mother would read Dr. Seuss books to him as a child; when he began to speak, he would talk in rhyme. His father was a house DJ who exposed Brown to all the music he would spin, as well as music from the likes of Roy Ayers, LL Cool J, Esham, and A Tribe Called Quest. For as long as he could remember, Brown had always wanted to be a rapper: "In kindergarten I'd say I wanted to be a rapper and people'd just laugh at me. 'That's a pretty funny job,' they'd say."


His young parents did their best to shelter him from the Detroit street crime and gang life: "My parents ain't really want me out the house. They did as much as they possibly could to keep me in the house with whatever the newest video game was. But you know you can only keep a kid in for so long. Plus that had me sheltered, so once I did get away I used to disappear for like four days." His two grandmothers helped provide for his family. His maternal grandmother worked for Chrysler, and she bought four to five houses: "To this day we still got those houses. She owns three houses in a row on that block. She raised her three children and a host of others in the middle house; the one to the left she paid cash for in the '90s from her long time neighbor; and the one on the right was her parents' home that she inherited when they died." She also owned two other homes on the east side of Detroit, one in which Brown was raised. The fifth house, also located on the east side, was occupied by his aunt and her family: "I used to get beat up all the time. I had nobody over there and I'm the oldest with two brothers and a younger sister. And I'm kind of not really gangster like that," Brown said in a 2012 interview. Originally from the Dexter-Linwood way of Detroit, Brown later moved to Hamtramck. He heavily associates with Detroit in his music.


At age 18, Brown became a drug dealer: "Once I got above a certain age, all that parent shit stopped. My mom and my pops split up. Once my pops left, I was the man of the house. I always told myself I was going to be a rapper my whole life. I was selling drugs since that's what all my friends were doing. And it was kind of like something to rap about maybe." Although his intentions were to stop once he got in trouble with the law, Brown was already too accustomed to the lifestyle: "I always told myself once I got my first case I was gonna stop. Then I got my first case, but I didn't stop. I got distribution and manufacturing and possession with intent to distribute. I was 19." His run-ins with the law didn't stop there: "I caught my second case loitering with some weed, but it violated my probation but I ran and I didn't go to court. I just ran for like at least five years. But once I got caught I had to do eight months. When I violated my probation, I got my second case and I was scared. I had warrants so I couldn't really slang like that cause I didn't wanna go to jail. I was broke in the hood. I had nothing else, so I just started going back to studying music and trying to become a rapper." After he did his time, Brown began to take his passion seriously and turn it into a career: "I got out of jail in '07. I took it serious from that time but it took a lot of shit to happen in my life to get me confident to know I could do it. I had more confidence when I got out of jail because the day when I got out of jail I started selling weed. I ain't had no money after the first two months, like, 'I was way better off in jail.' By then I was already making my New York trips and going to recording studios so I was already serious when I got locked up. When I got out it was like, 'It's now or never.'"


Brown began his career in a hip hop group called Rese'vor Dogs, alongside fellow Detroit-based rappers Chips and Dopehead. In 2003, the trio independently released an album titled Runispokets-N-Dumpemindariva under Ren-A-Sance Entertainment and F.B.C. Records. In the summer of 2003, the group received mild rotation on Detroit radio stations with their lead single, "Yes". After growing up on hip hop and tuning his rhyming skills in the city, Brown landed the attention of Roc-A-Fella Records A&R Travis Cummings, who flew Brown out to New York City, where he began recording in other artists' studios. After a lack of success with Roc-A-Fella, Brown returned to Detroit and eventually linked up with Detroit-based producer Nick Speed.


This article uses material from the Wikipedia article "Danny Brown", which is released under the Creative Commons Attribution-Share-Alike License 3.0.