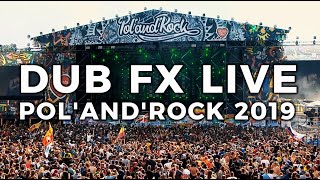 
Born in St Kilda, Melbourne, Australia, at the start of his career he was singing in a local alternative rock and rapcore band initially known as Twitch, which would later change its name to N.O.N . In 2004 they released a debut and the only album Exeunt Omnes. Soon after he moved to Italy and began a solo career. His trademark is creating rich live music using only his own performance aided by live looping and effects pedals combined with his voice. He creates intricate hip hop, reggae, and drum and bass rhythms.


Dub FX currently resides in Victoria, Australia with his wife, and two kids.


Stanford used to travel and perform with his former fiancée, Flower Fairy. Dub FX first met her in Manchester, after which she joined him on his travels around the globe to busk for the public. Flower Fairy would usually be seen selling CDs during Dub FX's performances or on stage alongside Stanford when they perform several tracks together. She is also featured singing on tracks from Everythinks A Ripple, "Wandering Love", "Flow", and "Time Will Tell".


After his first summer traveling through Europe in 2006, he came home to Melbourne where he shared a flat with Melbourne-based producer Sirius. Stanford showed Sirius this new style from the UK called dubstep. and by 2010 together they released the album titled Dub FX and Sirius - A Crossworlds. Dub FX does not beatbox on this album.


This article uses material from the Wikipedia article "Dub FX", which is released under the Creative Commons Attribution-Share-Alike License 3.0.