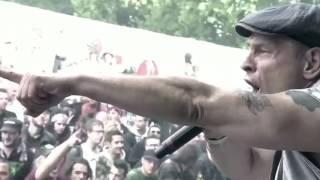 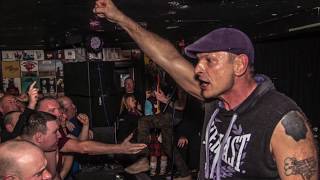 
Cockney Rejects are an English punk rock band that formed in the East End of London in 1977. Their 1980 song "Oi, Oi, Oi" was the inspiration for the name of the Oi! music genre. The band members are supporters of West Ham United, and pay tribute to the club with their hit cover version of "I'm Forever Blowing Bubbles", a song traditionally sung by West Ham supporters.


Cockney Rejects were formed in 1977 by brothers Jeff and Micky Geggus, with their brother-in-law Chris Murrell on bass and Paul Harvey on drums. Their first demo, "Flares n' Slippers", caught the attention of Small Wonder Records owner Pete Stennett, who introduced the band to Bob Sergeant. With Sergeant, they recorded their single "Flares n' Slippers", which sold out its first pressing. Murrell and Harvey were then replaced by Vince Riordan on bass and Andy Scott on drums, from fellow East End London band, The Tickets. This became known as Cockney Rejects' classic lineup, and its debut at the Bridge House in Canning Town in June 1979 is considered a turning point for the band. In September of that same year, the band signed with EMI and released their album Greatest Hits, Vol. 1 in February 1980.


Their biggest hit single in the United Kingdom, 1980's "The Greatest Cockney Rip-Off", was a parody of Sham 69's song "Hersham Boys". Other Cockney Rejects songs were less commercial, partly because they tended to be about hard-edged topics such as street fighting or football hooliganism. Other singles to appear in the UK were "Bad Man," "We Can Do Anything," "I'm Forever Blowing Bubbles " and "We Are the Firm" — all from 1980.


The violence depicted in their lyrics was often mirrored at their concerts, and the band members often fought to defend themselves or to split up conflicts between audience members. Jeff and Mick Geggus had both been amateur youth boxers, and had fought at the national level. Bass player Vince Riordan's uncle was Jack "The Hat" McVitie, a Cockney gangster who was murdered by Reggie Kray.


EMI records released a definitive Rejects retrospective on 29 August 2011. Called Join the Rejects, the Zonophone years '79-'81, it was a three-disc collection of all their EMI recordings including all the Peel sessions and rare demos from the day. Also included was a colour booklet with a blow-by-blow account of the stories behind the music by Micky Geggus.


This article uses material from the Wikipedia article "Cockney Rejects", which is released under the Creative Commons Attribution-Share-Alike License 3.0.