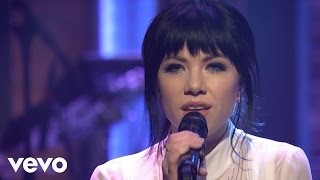 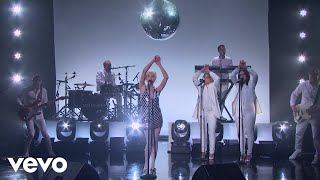 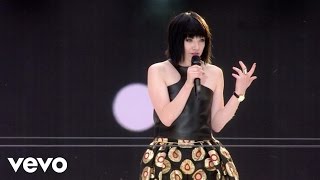 
Carly Rae Jepsen is a Canadian singer and songwriter. After studying musical theatre for most of her school life and while in university, Jepsen garnered mainstream attention after placing third on the fifth season of Canadian Idol in 2007. In 2008, Jepsen released her folk-influenced debut studio album Tug of War in Canada before it was internationally released in 2011.


Jepsen's breakthrough came in 2012 with her acclaimed single "Call Me Maybe", being declared the best-selling single of that year, selling over 18 million copies, reaching number one in more than 19 countries, and leading to major record deals with School Boy Records and Interscope Records. Jepsen's sophomore album, Kiss, released later that year and included the single "Good Time" with Owl City, charting in the top ten in Canada and the United States. In 2014, Jepsen made her Broadway theatre stage debut, playing the titular character in Cinderella for 12 weeks. The following year, she released her third studio album, Emotion, influenced by 1980s music, dance-pop and synth-pop, which included the singles, "I Really Like You", "Your Type" and "Run Away with Me". In 2016, Jepsen performed in the television special Grease: Live and voiced in the animated film Ballerina. Her fourth studio album, Dedicated, which included the singles "Party for One", "Now That I Found You", and "No Drug Like Me", was released in 2019, along with a B-side follow-up titled Dedicated Side B a year later. Her sixth studio album, The Loneliest Time, which includes the singles "Western Wind" and "Beach House", was released in October 2022.


Jepsen was born in Mission, British Columbia to Alexandra and Larry Jepsen, the second of their three children. She is of Danish, English and Scottish descent. Jepsen has an older brother, Colin, and a younger sister, Katie. She attended Heritage Park Secondary School and had a passion for musical theatre, appearing in student productions of Annie where she played Annie, Grease where she played Sandy Olsson, and The Wiz where she played Dorothy Gale. Her parents and stepparents were teachers, so Jepsen considered a career in music instruction as a second option. She applied to music-related programs, including those at Capilano University and the University of British Columbia, but at the advice of her high school drama teacher, she auditioned for the Canadian College of Performing Arts in Victoria, British Columbia and was one of 25 female students to gain admission into its year-long program in 2004.


After graduation, Jepsen relocated to Vancouver's west side and held several jobs, including a barista, assistant pastry chef, and bartender. At this time, she slept on a pull-out sofa and wrote songs in her spare time.


In 2007, Jepsen was convinced to audition for Canadian Idol by her high school drama teacher. In the audition, she performed her original song "Sweet Talker". In the competition, she finished in third place, which she considered the best possible outcome in retrospect. Her demo recording attracted the attention of music manager Jonathan Simkin, who signed Jepsen to a management deal with 604 Records that year. Jepsen released her debut single, a cover of John Denver's song "Sunshine on My Shoulders", in June 2008. Her debut album, Tug of War, was released in September 2008, and sold 10,000 copies in Canada. The singles "Tug of War" and "Bucket" peaked in the top 40 of the Canadian Hot 100, and received Gold certifications for sales of 40,000 units each. "Sour Candy", a duet with Josh Ramsay of Marianas Trench was released as the final single. In 2009, Jepsen toured western Canada with Marianas Trench and Shiloh.


This article uses material from the Wikipedia article "Carly Rae Jepsen", which is released under the Creative Commons Attribution-Share-Alike License 3.0.