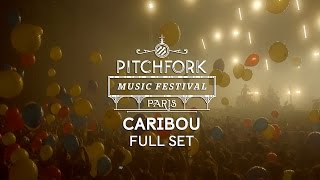 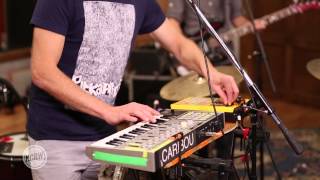 Caribou performing 'Our Love' Live at the Village on KCRW 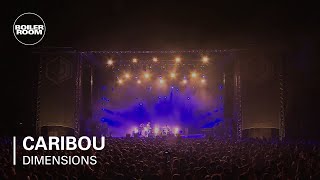 
Daniel Victor Snaith is a Canadian composer, musician, and recording artist who has performed under the stage names Caribou, Manitoba, and Daphni.


Snaith originally recorded under the stage name Manitoba, but after being threatened with a lawsuit by Richard "Handsome Dick" Manitoba , formerly of punk band The Dictators, Snaith changed his performance name to Caribou. Snaith's previous full-length albums were then re-released under the new moniker, and The Milk of Human Kindness was released in 2005 by Domino. In June that year the album topped the !earshot Campus and Community Radio Top 200 chart.


When playing gigs, Snaith usually performs with a live band and plays percussion. Ex-bandmates include bassist Andy Lloyd of Born Ruffians and drummer Peter Mitton, now a producer for CBC radio. Currently, the live band consists of Snaith, Ryan Smith, Brad Weber, and John Schmersal. Live shows also often include complex video projections on a large screen, as captured in a DVD released in November 2005. "In music I will have an idea to put some different sounds together or a melody that meshes with a chord sequence or a sonic mood," said Snaith in an interview. "I'm not the type of person who takes physical things apart and plays around with them, but I like taking mental ideas apart and playing around with them. That's what appeals to me about what I've spent my life doing."


In December 2011, Caribou curated the All Tomorrow's Parties "Nightmare Before Christmas" festival in Minehead, England, alongside co-curators Battles and Les Savy Fav.


This article uses material from the Wikipedia article "Caribou", which is released under the Creative Commons Attribution-Share-Alike License 3.0.