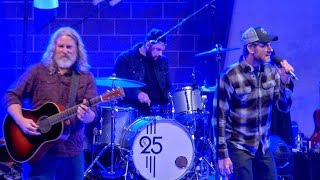 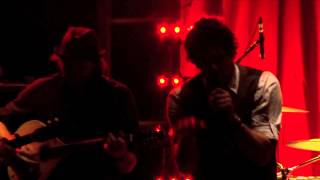 Carbon Leaf is a quintet from Richmond, Virginia, known for their alt-country, Celtic, and folk-infused indie rock. Though some of the band members have changed through the years, Carbon Leaf has been consistently creating and performing music since the early 1990s. The band currently consists of founding members Barry Privett, Carter Gravatt, and Terry Clark, as well as Jon Markel and Jesse Humphrey. Carbon Leaf is best known for the song "Life Less Ordinary", which debuted in 2004 and reached #5 on Billboard's Adult Alternative charts.


Carbon Leaf got their start at Randolph-Macon College in Virginia in 1992, practicing in an auditorium on campus. Their next step was playing backyard parties, mixers, fraternity, and sorority parties. Shortly after everyone graduated, they moved to Richmond, Virginia. From Richmond, they played the college circuit in Virginia and up the East Coast before moving on to clubs. Their style is not "Brazilian Polka Metal", despite the joking claims of guitarist Carter Gravatt .


Meander, their first album, was released in 1995. The first songs Carbon Leaf wrote, including "One Day" and "Country Monkee", are on the album.


Shadows in the Banquet Hall, released in 1997, includes "Flood", "Wolftrap and Fireflies", and "Attica's Flower Box Window". An award-winning video was made for "Flood".


Ether~Electrified Porch Music is the first album with Jordan Medas as the bassist and contains "Home", "American Tale", and "Blue Ridge Laughing". The band had sold over 10,000 copies of their first three independent CDs by late 1999, released on their own label, Constant Ivy Music.


Echo Echo was released in 2001 with "The Boxer" as the first track. In January 2002, Carbon Leaf won the first-ever American Music Awards Presents the Coca-Cola New Music Award for "The Boxer". As part of winning they performed "The Boxer" live on the AMAs, becoming the first unsigned band to perform at the awards show. Following this appearance, "The Boxer" entered regular rotation on radio stations including Washington, DC's DC101 . In May 2002, the band members gave up their day jobs in order to dedicate more time to the band and touring. The hidden bonus track "Dear" from their Echo Echo CD was originally written to play over the closing credits and on the soundtrack of the Kevin Hershberger civil war film Wicked Spring. Barry Privett also appeared in the film. In September 2002, Carbon Leaf won the Pontiac Vibe Summer Sound Off resulting in "The Boxer" being played in Pontiac Vibe commercials on MTV and VH1.


In January 2003, Carbon Leaf gave permission for fan-made recordings of their concerts to be included in the Live Music Archive, a part of the Internet Archive. Various concerts are available from 2000 to present in lossless formats SHN or FLAC and the lossy format VBR MP3, with the majority coming from the years 2002-2004. 5 Alive!, Carbon Leaf's first live album, was released in the summer of 2003. The album was recorded over five concerts during the autumn and winter of 2002 and its track list is assembled to match a concert playlist.


This article uses material from the Wikipedia article "Carbon Leaf", which is released under the Creative Commons Attribution-Share-Alike License 3.0.