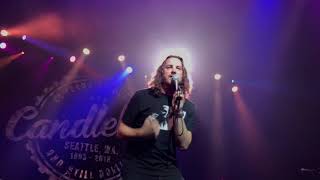 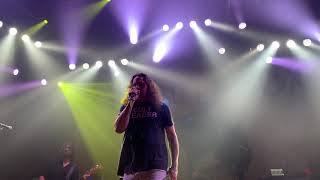 
Candlebox is an American rock band from Seattle, Washington. Since its formation in 1990, the group has released seven studio albums, several charting singles, a compilation, and a CD+DVD.


Candlebox found immediate success with the release of its self-titled debut album in July 1993. Candlebox featured four singles: "Change", "You", "Far Behind" and "Cover Me". "Far Behind" reached the top 20, and the album was certified quadruple platinum by the RIAA. The band's next album, Lucy , was certified gold, and was followed three years later by Happy Pills . After troubles with its record company, Candlebox broke up in 2000. The band reunited in 2006 and they have since released four more studio albums: Into the Sun , Love Stories & Other Musings Disappearing in Airports , and Wolves .


Candlebox began performing live in 1991. By 1992 the band was playing regularly in some of Seattle's top clubs to ever increasing audiences.


On July 20, 1993, Candlebox released its self-titled debut album. It sold more than four million copies and peaked at No. 7 on Billboard's album charts. Candlebox featured the hit singles "Change", "You", "Far Behind", and "Cover Me". "Far Behind" entered Billboard's top 20 in July 1993, peaked at No. 18, and stayed on the charts until January 1994. The tremendous radio, concert, and television success gained Candlebox an opening slot for Rush on their Counterparts tour and Metallica on their Shit Hits the Sheds Tour, as well as a main-stage slot at Woodstock '94. They also played with bands like Living Colour, The Offspring, Aerosmith, Radiohead and The Flaming Lips, and by the end of 1994, the band had graduated to headlining their own tours. In addition, Candlebox won Metal Edge magazine's 1994 Readers' Choice Award for Best New Band.


This article uses material from the Wikipedia article "Candlebox", which is released under the Creative Commons Attribution-Share-Alike License 3.0.