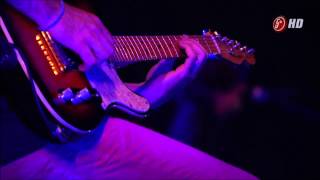 Caifanes is a rock en español band from Mexico City. Formed in 1985, the group achieved international fame during the late 1980s and early 1990s. The original lineup consisted of Saúl Hernández , ]  Sabo Romo , Alfonso André  , and Diego Herrera .Alejandro Marcovich later joined Caifanes as lead guitar player. Caifanes’ style can be described as a hybrid of British new wave, progressive rock and Latin percussion underscored by deep, somber, and Latin American-Mexican-Spanish-influenced lyrics and the vocal style of Saúl Hernández. Members of Caifanes have cited The Cure, The Beatles and King Crimson as major influences, with Adrian Belew having produced their third studio album, El Silencio, as well as making a guest appearance on it.


The name Caifanes is derived from 1940s Mexican pachuco slang "Cae fine". Its equivalent in English would be “cool dude.” The word has also been used to describe the proverbial Mexican pachuco, delinquent, or outsider.


The seeds of what was to later become Caifanes were planted in 1984 with Las Insolitas Imágenes de Aurora , a band that included Saúl Hernández, Alfonso André and Alejandro Marcovich. According to Marcovich, Insólitas started out as a side project for the purpose of performing as a party band for the filming of his brother's film project . At the time, both Hernández and Marcovich were playing in different bands. The members enjoyed the experience of playing in Insolitas and decided to continue. As the seriousness of the project grew the band began to play in different spots in Mexico City like Rockotitlán, High Tower, and El Jabalí. In May 1986, Insolitas recorded a live demo performed at Rockotitlán. Insólitas developed a strong cult following in Mexico City.


Insólitas broke up in 1986. Saúl and Alfonso reformed as Caifanes with bass player/producer Sabo Romo and Diego Herrera on keyboards and sax. Caifanes’ first live show was April 11, 1987, in Rockotitlán. The building was filled to capacity and many people were left outside. Their popularity began to grow throughout Mexico City. By late 1987 Caifanes had carved a niche for themselves as a dark contrast to the corporate pop/rock and light ballads that dominated Mexican radio and television during the 1980s. At times the image and the sound were considered radical for the Mexican music industry. Between December 28, 1986 and January 3, 1987 Juan Aceves produced a four-song demo for the band using "free" studio time at night at Arco Studio . The demo was showcased on the independent radio program Espacio 59 , a show that promoted up and coming rock bands. With demo in hand Caifanes approached CBS Mexico. The musical director at the time shunned them for dark new wave attire and said, “You look like fags.” At the time, Caifanes’ sound and look was influenced by British post-punk groups such as The Cure and The Jesus and Mary Chain. They dressed in black suits and sported frizzly hair and makeup. Upon hearing the demo of “Será Por Eso” , the CBS executive said, “At CBS, our business is to sell records, not coffins.”


Nevertheless, the movement of Rock en Español or rock en tu idioma was too strong to ignore by record execs. The flood of groups from Spain and Argentina forced Mexican labels to take a second look at up-and-coming Mexican bands. Caifanes received a big break when Ariola records invited them to open for Argentinean rocker Miguel Mateos’ Mexico City show. The show brought Cafaines to the attention of Miguel Mateos’ producer Oscar Lopez. Oscar fell in love with the band and took them to the studio to record a demo. Lopez would be instrumental in their signing to RCA-Ariola and would go on to produce their first two albums.


Caifanes’ debut album Caifanes was released in August 1988 by RCA-Ariola. The LP was preceded by an EP made up of three songs, in order to test the market. The immediate sale of 300,000 copies of the EP cemented the band's appeal. The first single “Mátenme Porque Me Muero” became a minor hit in Mexico City. The first three singles garnered sufficient radio play.


In December 1988 Caifanes released a cover of Cuban folk singer Guillermo Rodriguez Fiffe's classic cumbia , “La Negra Tomasa,” as a Maxi single. The song was a massive hit in Mexico and introduced Caifanes to a wider audience nationally and abroad.


This article uses material from the Wikipedia article "Caifanes", which is released under the Creative Commons Attribution-Share-Alike License 3.0.