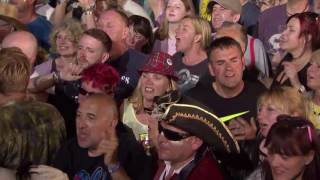 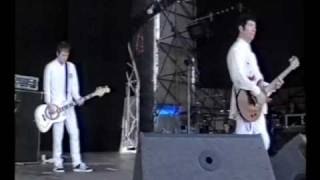 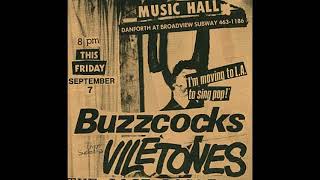 
Buzzcocks are an English punk rock band formed in Bolton, England in 1976 by singer-songwriter-guitarist Pete Shelley and singer-songwriter Howard Devoto. They are regarded as a seminal influence on the Manchester music scene, the independent record label movement, punk rock, power pop, and pop punk. They achieved commercial success with singles that fused pop craftsmanship with rapid-fire punk energy. These singles were collected on Singles Going Steady, described by critic Ned Raggett as a "punk masterpiece".


Devoto and Shelley chose the name "Buzzcocks" after reading the headline, "It's the Buzz, Cock!", in a review of the TV series Rock Follies in Time Out magazine. The "buzz" is the excitement of playing on stage; "cock" is northern English slang meaning "friend". They thought it captured the excitement of the nascent punk scene, as well as having humorous sexual connotations following Peter Shelley's time working in a Bolton adult shop. Per the band, there is no "the" in Buzzcocks.


Devoto left the band in 1977, after which Pete Shelley became the principal singer-songwriter. Shelley died on 6 December 2018, leaving the future of the band uncertain.


Howard Trafford, a student at Bolton Institute of Technology, placed a notice in the college looking for musicians sharing a liking for The Velvet Underground's song "Sister Ray".Peter McNeish, a fellow student at the Institute, responded to the notice. Trafford had previously been involved in electronic music, while McNeish had played rock.


By late 1975, Trafford and McNeish had recruited a drummer and formed, in effect, an embryonic version of Buzzcocks. The band formed, officially, in February 1976; McNeish assumed the stage name Pete Shelley and Trafford named himself Howard Devoto. They performed live for the first time on 1 April 1976 at their college. Garth Davies played bass guitar and Mick Singleton played drums. Singleton also played in local band Black Cat Bone.


After reading an NME review of the Sex Pistols' first performance, Shelley and Devoto travelled to London together to see the Sex Pistols in February 1976. Shelley and Devoto were impressed by what they saw and arranged for the Sex Pistols to come and perform at the Lesser Free Trade Hall in Manchester, in June 1976. Buzzcocks intended to play at this concert, but the other musicians dropped out, and Shelley and Devoto were unable to recruit other musicians in time for the gig. Once they had recruited bass guitarist Steve Diggle and drummer John Maher, they made their debut opening for the Sex Pistols' second Manchester concert in July 1976. A brief clip of Devoto-era Buzzcocks performing The Troggs' "I Can't Control Myself" appears in the Punk: Attitude documentary directed by Don Letts. In September 1976 the band travelled to London to perform at the two-day 100 Club Punk Festival, organised by Malcolm McLaren. Other performers included: the Sex Pistols, Subway Sect, Siouxsie and the Banshees, The Clash, The Vibrators, The Damned and the French band Stinky Toys.