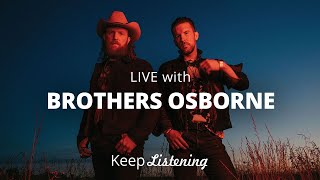 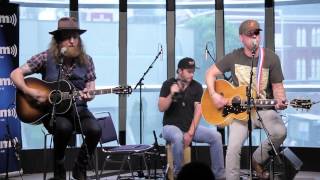 Brothers Osborne is an American country music duo consisting of brothers T.J. Osborne and John Osborne , both natives of Deale, Maryland. The duo is signed to EMI Nashville and has released one self-titled extended play album and three studio albums: Pawn Shop ,Port Saint Joe and Skeletons. Seven of their singles have charted on Hot Country Songs and Country Airplay, the highest peak belonging to "Stay a Little Longer", which charted at No. 4 on the former and No. 2 on the latter. The duo's albums were both produced by Jay Joyce, and consist largely of songs that both brothers wrote with a number of collaborators. Artists with whom they have worked include David Nail, Dierks Bentley, Lee Ann Womack, and Lucie Silvas, the last of whom is John's wife. The musical style of the duo takes influence from Southern rock, outlaw country, and neotraditional country.


Brothers Osborne's members, John and Thomas John "T.J." Osborne, were both born and raised in Deale, Maryland, on the western shore of the Chesapeake Bay. The brothers took inspiration from their father's music collection, and as teenagers, they played in a local cover band called Deuce and a Quarter. The group represented their high school in the Anne Arundel County "Battle of the Bands" in 2000; they admitted to being nervous before the performance. The two then moved to Nashville and signed a publishing contract with Warner Chappell, and later with the Nashville branch of EMI. The brothers' full names are John Thomas and Thomas John. Their father, who is also named John Thomas Osborne, explained the reason behind the simple name flipping was due to not having a name picked out and being distracted under pressure. When their mother, Tricia, went into labor with T.J. , they were engulfed in an Philadelphia Eagles vs. Washington Redskins football game and she suggested "We gotta get this name. We'll just name him Thomas John, how about that?"


Their third single "Stay a Little Longer" was issued in 2015. This song was originally included on the EP, but was re-recorded for the single release. "Stay a Little Longer" went on to become a Top 5 country airplay hit in 2016. It also led to the release of their debut album Pawn Shop, which was mostly produced by Jay Joyce. Two more singles followed from the album: "21 Summer" and "It Ain't My Fault", both of which made the country music charts as well. Concurrently with the former, the duo was featured on David Nail's single "Good at Tonight". Both brothers wrote nearly every song on Pawn Shop, with collaborators including Shane McAnally, Craig Wiseman, Casey Beathard, Ross Copperman, Maren Morris and her husband Ryan Hurd, and Lee Thomas Miller. Musicians appearing on the album included Lee Ann Womack and John's wife,Lucie Silvas. The album was produced by Jay Joyce except for the original recording of "Rum" and the track "Heart Shaped Locket", which the brothers produced with Brad Hill. Coinciding with the album's success, the brothers won five industry awards. Both the Academy of Country Music and Country Music Association awarded them as Vocal Duo of the Year in both 2016 and 2017, with the latter association also awarding New Vocal Duo in 2016.


The duo released a new single, "Shoot Me Straight", in January 2018. It is the lead single to their second studio album, Port Saint Joe, which was released in April. The album, also produced by Joyce, features many of the same collaborators as its predecessor.


Between 2018 and 2019, the brothers were part of several collaborative projects. In mid-2018, they were featured on Dierks Bentley's "Burning Man", a single from his studio album The Mountain. In 2019, the duo collaborated with Maren Morris on "All My Favorite People" on her second studio album Girl; the brothers also joined Brooks & Dunn on their 2019 album Reboot, where they contributed to a re-recording of that duo's 1993 hit "Hard Workin' Man".


On October 11, 2019, they released a live album recorded during three concerts at the Ryman Auditorium in Nashville in February. This was followed in July 2020 by the announcement of a third studio album, titled Skeletons, which was released on October 9, 2020. Also produced by Jay Joyce, the album includes songs written by the brothers, with other co-writers including Ian Fitchuk, Daniel Tashian, Natalie Hemby, Casey Beathard, and Hayes Carll. "All Night" is the album's lead single.


This article uses material from the Wikipedia article "Brothers Osborne", which is released under the Creative Commons Attribution-Share-Alike License 3.0.