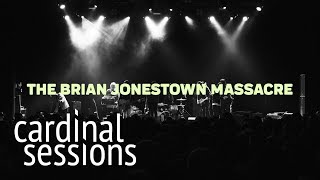 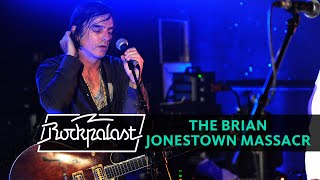 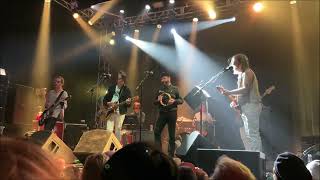 About The Brian Jonestown Massacre


The Brian Jonestown Massacre is an American musical project and band led and started by Anton Newcombe. It was formed in San Francisco in 1990.


The bandname is a portmanteau of deceased Rolling Stones founder Brian Jones and the 1978 Jonestown Massacre.


The collective was founded by Anton Newcombe in San Francisco between 1990 and 1993. Their first albums were compilations of recording sessions and an early demo tape, titled Pol Pot's Pleasure Penthouse. This release became a popular bootleg.


A second album, Spacegirl and Other Favorites, was released in 1993 as a vinyl-only release and was compiled from what Newcombe called his "studio trash". The album includes "Hide and Seek", which was released as a single in 1994. The band's follow-up album, Methodrone, was developed largely out of the concepts explored on Spacegirl and heavily influenced by the shoegaze genre that had gained prominence several years prior to its release. The album's ethereal rock sound is comparable to bands such as Galaxie 500, Spacemen 3 and My Bloody Valentine. Two tracks from the album, "She Made Me" and "Evergreen," were released as a double A-side single in 1992. Methodrone was recorded primarily at a studio in the Hunter's Point region of San Francisco called The Compound, where Naut Humon provided an environment for Newcombe to record for hours on end.


Over the next couple of years, the band shifted its sound from their more shoegaze, goth, and dream pop influences of the '80s and '90s into a '60s retro-futurist aesthetic. As line-up changes persisted, the band continued to record and in 1996 released three full-length studio albums. The first of these, Take It from the Man!, is rooted heavily in the maximum rhythm and blues aesthetic of the 1960s British Invasion. The album includes the song "Straight Up and Down," which was later used as theme music for the HBO television drama series Boardwalk Empire , and was engineered by Larry Thrasher of the influential group Psychic TV.


This article uses material from the Wikipedia article "The Brian Jonestown Massacre", which is released under the Creative Commons Attribution-Share-Alike License 3.0.