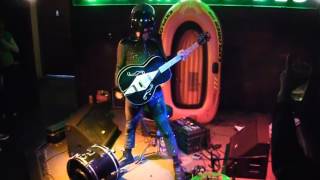 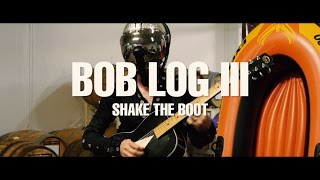 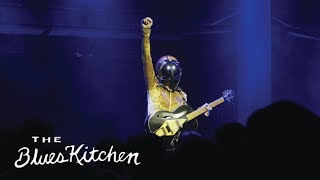 
Bob Log III is an American slide guitar one-man band based in Tucson, Arizona, and Melbourne, Australia. During performances, he plays old Silvertone archtop guitars, wears a full body human cannonball suit, and a helmet wired to a telephone receiver, which allows him to devote his hands and feet to guitar and drums. His show has been described as a blues punk guitar dance party. Log tours internationally, performing about 150 shows each year; he has made tours of North America, Europe, Japan and Australia, New Zealand, Mexico, Taiwan, and Iceland.


Bob Log III was born in Chicago, Illinois and raised in Tucson, Arizona. Growing up, Log listened to musical artists such as AC/DC, Screaming Jay Hawkins, Bo Diddley, Hasil Adkins and Chuck Berry. Log got his first guitar at the age of 11, and by the age of 16 he had moved to slide guitar, playing Delta blues, modeling his slide guitar style on that of Mississippi Fred McDowell.


Log began his music career recording and touring with Mondo Guano, a four-piece slide guitar, blues, home-made percussion band based in Tucson, Arizona. Upon leaving Mondo Guano, Log went on to perform as one half of the Delta blues rock duo, Doo Rag, with bandmate Thermos Malling.


After six years of making music with Doo Rag, Bob began a solo career, warming up audiences bands, including R. L. Burnside, Blues Explosion, Ween, Franz Ferdinand, and Ani Difranco. Over time, Log acquired a kick-drum and a homemade foot cymbal which he custom-outfitted with a kick pedal of its own. These instruments, combined with his slide guitar work, telephone microphone vocals, and drum machine accompaniment, form the framework on which Bob Log constructs his songs. His version of quick Delta blues is based on the sound that he and Thermos developed in the duo Doo Rag, with greater emphasis on guitar showmanship, fingerpicking, and one-man-band-style drumming with his feet. He began touring in North America, including performances in Toronto in 1999 and 2000.


Log describes his on-stage setup in the song "One Man Band Boom", introducing himself to the audience as, "Bob Log the third, one-man band, Tucson, Arizona. Heyeeeh! Lemme introduce the band to ya. On cymbals, left foot. Over here on the bass drum we got right foot. Shut up! This is my left hand that does all the slide work, right hand does the pickin'. My mouth hole does most of the talkin'. And you're looking at my finger. My finger is an asshole."


An early press release from record label Fat Possum claimed Log had a monkey paw grafted on to his wrist after a boating accident as a child. When asked to explain Fat Possum's insistence that his right hand is a monkey's paw, Log replied to an interviewer that, "My hand is just hairy. Very, very hairy. It is NOT a paw. Fat Possum was drunk."


This article uses material from the Wikipedia article "Bob Log III", which is released under the Creative Commons Attribution-Share-Alike License 3.0.