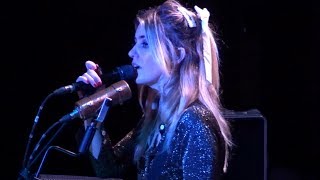 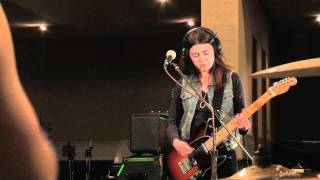 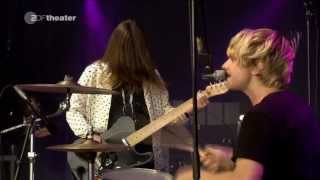 
Blood Red Shoes are an English alternative rock duo from Brighton consisting of Laura-Mary Carter and Steven Ansell. They have released five full-length albums, Box of Secrets , Fire Like This , In Time to Voices , Blood Red Shoes and Get Tragic as well as several EPs and a number of singles. In 2014, they founded their own label, Jazz Life.


Blood Red Shoes formed in late 2004, after Steven Ansell and Laura-Mary Carter's previous bands broke up and they decided to "have a jam". In an interview in Berlin, Carter explained that the band's name was taken from a Ginger Rogers/Fred Astaire musical, in which Rogers had turned a pair of white dancing shoes red with blood due to the amount of dancing she had done practicing for the role.


Blood Red Shoes released their debut single "Victory for the Magpie" on 18 July 2005, followed by the double A-side "Stitch Me Back / Meet Me at Eight" then "A.D.H.D", both released on Try Harder, and "You Bring Me Down" on Drowned in Sound / Abeano/XL in 2006. After playing over 300 live shows around the UK, they were signed to V2 in April 2007 with whom they released the singles "It's Getting Boring by the Sea" and "I Wish I Was Someone Better" , as well as the singles compilation album I'll Be Your Eyes on 25 June 2007.


The band featured on both days of the 2007 Camden Crawl, playing the Purple Turtle and the Earl of Camden respectively, and were one of four bands to play the NME New Music Tour 2007, with the Little Ones, Pull Tiger Tail and the Rumble Strips. The summer of 2007 saw the band playing several festival spots, including T in the Park, the inaugural Underage Festival, and the Electric Gardens festival. They also supported a wide range of bands, such as Biffy Clyro and Maxïmo Park.


Following the sale of V2 to Universal Music Group, the band's début album Box of Secrets was released on Mercury Records/Universal on 14 April 2008. It was leaked to private torrent trackers in November 2007, several months before its retail release date. The band have commented that although they have no issue with file sharing and downloading free music, having their début album become available outside of their control and without the intended artwork and lyric booklet was a disappointment. Laura-Mary Carter from the band has designed the record sleeve for every release by the band.


They played a nine-date tour of the UK, in support of the album, followed by dates across mainland Europe and Japan. They played major international festivals including Glastonbury festival, Reading and Leeds, Summer Sonic, Pukkelpop, Lowlands and Melt!.


This article uses material from the Wikipedia article "Blood Red Shoes", which is released under the Creative Commons Attribution-Share-Alike License 3.0.