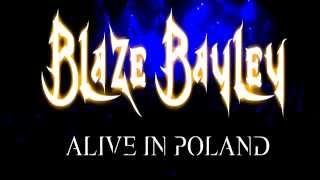 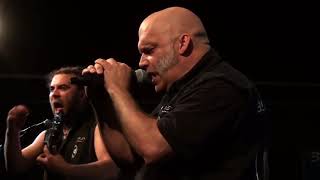 
Blaze Bayley is an English singer, musician, songwriter, and lyricist. He pursued a solo career, which established from 2000 until present, and already released ten studio albums. He was the lead singer of Wolfsbane from 1984 to 1994 . He was also the lead singer of Iron Maiden during Bruce Dickinson's absence from 1994 to 1999, before Dickinson decided to reunite with Iron Maiden.


Bayley was born Bayley Alexander Cooke in Birmingham, England on 29 May 1963. His main inspiration to be a singer was when he saw the legendary Ronnie James Dio perform live at Birmingham Odeon on Dio's "Holy Diver" tour. At the time, Bayley was working a night job as a hotel porter.


Bayley started his musical career as the lead vocalist of Wolfsbane, upon their formation in 1984. The first album, Live Fast, Die Fast, was released in 1989.


Prior to this, they had recorded three demos entitled Wolfsbane , Dancin' Dirty and Wasted but Dangerous . This last one was recorded at Square Dance Studios, Derby, U.K.. They were the supporting act for Iron Maiden's UK division of their No Prayer on the Road tour in 1990. Wolfsbane's second release, an EP titled All Hell's Breaking Loose Down at Little Kathy Wilson's Place, was released the same year. The band's second full studio album Down Fall the Good Guys, was released in 1991, giving them their only UK Chart entry with their single "Ezy" charting at No. 68.


Def American dropped Wolfsbane as they felt that the band were not selling well enough. This did not stop the band from being voted as the UK's best unsigned act in 1993. The same year, the band released a live album, Massive Noise Injection, through the Bronze Company label.


The band released their third studio album, the self-titled Wolfsbane, in 1994, again on the Bronze Company label. A limited edition of this album included the EP Everything Else. When Bruce Dickinson departed fellow English heavy metal band Iron Maiden in 1993, Bayley was chosen between hundreds of auditions. Wolfsbane disbanded afterwards.


This article uses material from the Wikipedia article "Blaze Bayley", which is released under the Creative Commons Attribution-Share-Alike License 3.0.