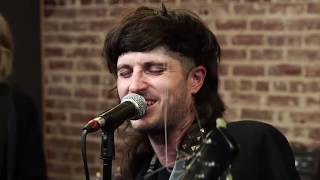 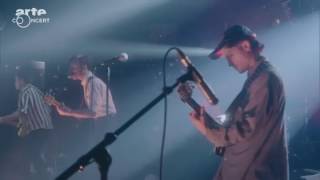 
The band formed in Dunwoody, Georgia after guitarist Cole Alexander and bassist Jared Swilley left the Renegades, and guitarist Ben Eberbaugh left the Reruns. Alexander and Swilley were known for their crude antics both during shows and at school. They were kicked out of school during their senior year after the Columbine Massacre in 1999 because they were regarded as a "subculture danger." Drummer Joe Bradley, who had been studying in college after graduating high school early, joined a few months later. They released their first 7-inch in 2002 with tracks from their first ever studio LP ~ completed in 2000 with producer/guitarist Eric Gagnon of The El Caminos. The 7-inch featured Ain't Coming Back, B 52 Bomberboy, Can't Get Me Down and Stone Cold all of which were tracked, mixed and mastered by Gagnon, and was released on their own record label, Die Slaughterhaus. Just days before a tour was to begin in December 2002, guitarist Ben Eberbaugh was driving a car when he was struck by a drunk driver and killed. The band carried on, believing that Eberbaugh would want them to continue.


The band's debut full-length album, Black Lips!, was released on Bomp! Records in 2003. Within this tribute album commemorating Ben Eberbaugh's life as a quality musician, they released three more songs from their set with Gagnon : Stone Cold , Can't Get Me Down and Everybody Loves A Cocksucker were already mixed and mastered by Eric. They were wise enough to have Stone Cold remastered with the channels flipped from the original two track mix ~ a clever way to avoid legal trouble from a keen producer. Back in 2000, Jared put himself in rehab during the studio session with Eric, so Cole asked Gagnon to play bass both in the studio and during a live show at The Earl ~ Eric agreed so long as he didn't have to record anymore firecrackers in his studio . Eberbaugh's bluesy guitar takes control of their early work ~ Eric was a perfect match for these youngsters ~ with a knack for the blues, Eric features Ben's guitar. After his untimely death in 2002, Ben's legacy was filled by Jack Hines, a friend of the band members, and they recorded their second studio album, We Did Not Know the Forest Spirit Made the Flowers Grow, with him. Hines quit the band in 2004 so he could settle down with his wife. Ian St. Pé, who at the time was enrolled at the University of Memphis as a music major, got a call from the band asking if he wanted to immediately join them on tour. Pé, who spent his early twenties buying alcohol for his then-underage future bandmates, dropped out of school and accepted the band's offer. In 2005, they released two more 7 inch vinyls through Slovenly Recordings. Eric Gagnon produced both "Stuck In My Mind" and "Does She Want" - which were tracked, mixed and mastered by Gagnon back in 2000. They slowly built a fanbase that appreciated their rough pastiche of blues, rock, doo-wop, country, and punk. They gained national attention in 2006 with features in Spin and Rolling Stone. The band got exposure in The New York Times during the 2007 South by Southwest music festival in Austin, Texas, in which they played a dozen shows over a three-day period.


Their debut for Vice Records, Los Valientes del Mundo Nuevo, was released in February 2007. It is supposed to have been recorded at a bar in Tijuana, Mexico, but fans, musicians, and journalists have expressed doubts about that claim and speculated that some or most of it was recorded in a studio with John Reis. Responding to such allegations, Swilley has stated that Reis recorded the show live with a soundboard, microphones, and a computer placed strategically near the stage. St. Pe said that the band had to use the best twelve out of twenty live cuts from the Tijuana show, which he described as "absolutely nuts." In September 2007 their second studio album for Vice entitled Good Bad Not Evil was released. The Black Lips made their American national television debut in October 2007 on Late Night with Conan O'Brien and played "O Katrina". In May 2008 Black Lips made their UK TV debut performing 'Bad Kids' on BBC3's The Wall. The Black Lips were to star in the film Let It Be, in which they portrayed musicians in a fictitious 1980s era DIY band called The Renegades. The movie was set for production in the summer of 2008; however, in a September 2008 interview, the band admitted they became disenchanted with the project after viewing the trailer and seeing the way they felt they were going to be portrayed in the movie.


In October 2008 a portion of the band's song "Veni Vidi Vici" was played during the season premiere episode of the television show Dirty Sexy Money, shown on the American network ABC. The same song was going to be used in a commercial by British supermarket chain Tesco, but, according to the band, the company decided not to go through with the deal because of concerns with the lyrical content of the song. The group toured India in January 2009. Following some antics at their show in Chennai, the band became worried about being arrested and imprisoned for "homosexual acts" so they fled the city and eventually the country. The band summed up what happened in an interview at the musical festival: "they kissed, and some weiners were pulled out..." Vice Records documented the trip. After the band left India, they traveled to Berlin, Germany and recorded a 12-song LP of gospel-influenced songs with King Khan & BBQ. The album was released on September 22, 2009, under the name The Almighty Defenders.


The Black Lips released their fifth studio album, 200 Million Thousand, on February 24, 2009 on Vice Records,with the help of Zach, Meredith, and Austin. The songs were recorded at New Street Studio, a former art gallery in Decatur GA, near Atlanta. The band embarked on a world tour in 2009 to support this album. Over the course of eleven months, the band played 122 shows total between Europe and the United States. The band have a featured role in the documentary We Fun: Atlanta, GA Inside Out. The title was coined by Jared Swilley on the band's blog. The film made its debut at the Atlanta Film Festival in April 2009. A song called "Arboles De La Barranca" was performed by Black Lips for the film Rudo y Cursi. Volume six of Brendan Canty's Burn To Shine series includes a performance by the Black Lips. There is no release date set for.


This article uses material from the Wikipedia article "Black Lips", which is released under the Creative Commons Attribution-Share-Alike License 3.0.