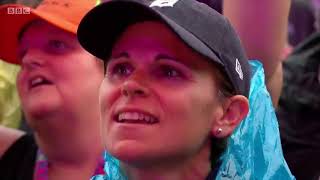 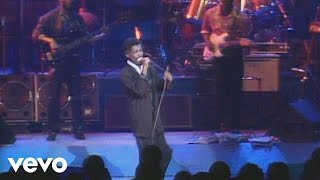 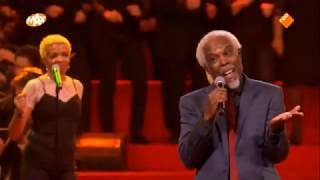 
Leslie Sebastian Charles, MBE , known professionally as Billy Ocean, is a Trinidadian–British recording artist who had a string of R&B international pop hits in the 1970s and 1980s. He was the most popular British R&B singer-songwriter of the early to mid-1980s. After scoring his first four UK Top 20 singles including two No. 2 hits in 1976 and 1977, seven years passed before he accumulated a series of transatlantic successes, including three US No.1's. His 1985 hit "When the Going Gets Tough, the Tough Get Going" reached No. 1 in the UK and No. 2 in the US. In 1985, Ocean won the Grammy Award for Best Male R&B Vocal Performance for his worldwide hit "Caribbean Queen " and in 1987 was nominated for the Brit Award for Best British Male Artist. His 1988 hit "Get Outta My Dreams, Get into My Car" reached No. 1 in the US and No. 3 in the UK. His 1986 hit "There'll Be Sad Songs " also reached No. 1 in the US.


In 2002, the University of Westminster, London, awarded Ocean an honorary doctorate of music. In 2010, Ocean was presented with the Lifetime Achievement Award at the MOBO Awards. On 29 July 2011, Ocean became a Companion of the Liverpool Institute for Performing Arts, presented to him by Sir Paul McCartney. He is a member of the Rastafari movement.


Ocean was born in Fyzabad, Trinidad and Tobago, then part of the British Windward Islands, to Hainsley Charles, a Grenadian musician and his wife Violet. He moved to Romford, England when he was ten years old, just before Trinidad and Tobago became independent in 1962. He was exposed to music at an early age. During his teenage years, he sang regularly in London clubs while also working as a tailor in London's Savile Row. He was discovered by his first manager, John Morphew, who recorded a double A-side single at Pye Studios in London with a full orchestra. However, the ballad singing style of Ocean was going out of fashion and Morphew was unable to get any major label to release it. It remains unreleased. Ocean's father — who had countersigned the management contract as Ocean was underage — asked Morphew to release him from contract, which he did without penalty. In 1969, he joined a local band, The Shades of Midnight, playing in the Shoreditch area of London. He recorded his first single, "Nashville Rain", backed with "Sun in the Morning" in 1971 for Spark Records as Les Charles, and for two years fronted a studio band called Scorched Earth, with whom he released "On the Run" backed with "Let's Put Our Emotions in Motion" in 1974.


In an interview with Myfanwy Warhurst on ABC Radio Melbourne, Ocean stated that the story of him having taken his stage name from the local "Ocean Estate", Stepney in London's East End, where he was living at the time, was in fact not correct. According to the interview, the name was derived from a local football team that was in his home town in Trinidad and Tobago, who called themselves "Oceans 11". In 1976, he recorded his first album, Billy Ocean, with its first single release, "Love Really Hurts Without You", charting at No. 2 in the UK Singles Chart and No. 22 in the US Billboard Hot 100. He enjoyed club success from the songs "Are You Ready" and "Stay The Night" from the album City Limit — both of which were later covered by La Toya Jackson. More successes ensued, including "L.O.D. ". He also wrote and composed songs for other artists. In 1981, he scored the US R&B chart with "Nights ."


Between 1976 and 1982, Ocean released four albums and Inner Feelings) through his record label GTO, none of which scored success on any musical charts aside, from his biggest single up to that point, 1976's "Love Really Hurts Without You", which was a top 40 and a top 10 hit in both the UK and the US .


As Sony Music acquired GTO Records in 1978, Ocean was shifted to Jive from Epic, in which he received a second breakthrough in his career in the early 1980s. Late 1984 saw the release of his fifth studio album Suddenly and its main single, "Caribbean Queen " becoming successes on the charts. "Caribbean Queen" became Ocean's first number one single on both the US Billboard Hot 100 and Hot Black Singles charts in late 1984, and the album debuted in the top ten, peaking at No. 9 on both the US Billboard 200 and the UK Albums Chart simultaneously in the US and UK.Suddenly reached gold in the UK, and was certified double platinum by the RIAA . He also recorded with Scott Walker in 1984, singing on his album Climate of Hunter.


This article uses material from the Wikipedia article "Billy Ocean", which is released under the Creative Commons Attribution-Share-Alike License 3.0.