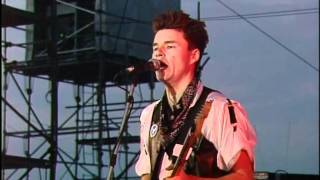 
Big Country is a Scottish rock band formed in Dunfermline, Fife, in 1981.


The height of the band's popularity was in the early to mid 1980s, although it has retained a cult following for many years since. The band's music incorporated Scottish folk and martial music styles, and the band engineered their guitar-driven sound to evoke the sound of bagpipes, fiddles and other traditional folk instruments.


Big Country comprised Stuart Adamson , Bruce Watson , Tony Butler and Mark Brzezicki . Before the recruitment of Butler and Brzezicki an early incarnation of Big Country was a five-piece band, featuring Peter Wishart on keyboards, his brother Alan on bass, and Clive Parker, drummer from Spizz Energi/Athletico Spizz '80. Parker had approached Adamson to join his new band after the demise of Skids.


Adamson auditioned Parker at The Members' rehearsal room in Ladbroke Grove, London and the next day was called on to play drums on demos for CBS Records at their Whitfield Street studios. The demos were produced by Adam Sieff and just featured Adamson, Parker and Watson. Adamson had asked bassist Dave Allen from Gang of Four to join the band but he declined. Adamson asked Parker to join the band, which led to eight months of rehearsal in Dunfermline in a disused furniture warehouse.


The culmination was a concert at the Glen Pavilion at Dunfermline and an interview with BBC Radio Scotland where the CBS Studio demos were utilised. The band then played live with Alice Cooper's Special Forces tour for two concerts in 1982 at The Brighton Centre.


Butler and Brzezicki, working under the name 'Rhythm for Hire,' were brought in to play on "Harvest Home." They immediately hit it off with Adamson and Watson, who invited them to join the band.


This article uses material from the Wikipedia article "Big Country", which is released under the Creative Commons Attribution-Share-Alike License 3.0.