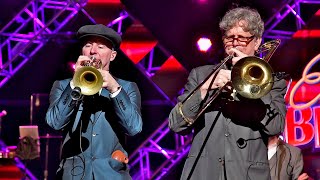 Big Bad Voodoo Daddy is a contemporary swing revival band from Southern California. Their notable singles include "Go Daddy-O", "You & Me & the Bottle Makes 3 Tonight ", and "Mr. Pinstripe Suit". The band played at the Super Bowl XXXIII half-time show in 1999.


The band was originally formed in Ventura, California, in 1989 by leader Scotty Morris. The band was named Big Bad Voodoo Daddy after Scotty Morris met blues guitar legend Albert Collins at one of the latter's concerts. "He signed my poster 'To Scotty, the big bad voodoo daddy'," Morris explains. "I thought it was the coolest name I ever heard on one of the coolest musical nights I ever had. So when it came time to name this band, I didn't really have a choice. I felt like it was handed down to me." He and Kurt Sodergren are the two original members, with the rest of the band joining later. The band has concentrated on the swing of the 1940s and 1950s, playing clubs and lounges in their early years.


After playing in punk and alternative rock bands during the 1980s, including False Confession, part of the Oxnard, California Nardcore scene, Scotty Morris founded Big Bad Voodoo Daddy with Kurt Sodergren. The band launched two CDs, Big Bad Voodoo Daddy and Watchu' Want for Christmas? under their own label before getting their big break when their songs "You & Me & the Bottle Makes 3 Tonight ", "I Wan'na Be Like You" and "Go Daddy-O" were featured in the soundtrack of the 1996 comedy-drama Swingers.


From there, they were signed by Interscope Records. With Interscope, the band released Americana Deluxe, This Beautiful Life, and Save My Soul. The band has continued their tours, performances and album releases. The band appeared at the half-time show of Super Bowl XXXIII and the 2006 Capital One Bowl, and also served as the house band for ESPN's ESPY Awards for a few years. The band created a version of the opening theme for the sitcom 3rd Rock from the Sun, which was used for the 1998-1999 and 1999–2000 seasons.


They created a new song for the movie The Wild, and recorded a song for Disney's Phineas and Ferb Christmas Vacation Special. BBVD also performed on the hit television show Dancing with the Stars, and The Tonight Show with Jay Leno to promote their album How Big Can You Get?: The Music of Cab Calloway, a collection of their renditions of Cab Calloway songs in April 2009. They also have been performing at EPCOT for the annual Food and Wine Festival since 2008. They performed at Kahilu Theatre, Waimea Hawaii and while Kurt was there he spoke of going to Scott's house in Ventura and working on a new album beginning February 2019.


This article uses material from the Wikipedia article "Big Bad Voodoo Daddy", which is released under the Creative Commons Attribution-Share-Alike License 3.0.