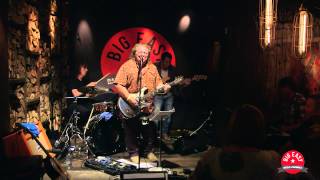 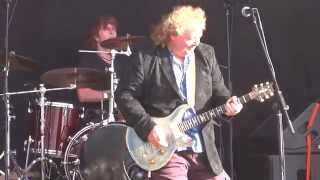 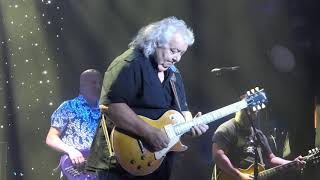 
Bernard John Marsden is an English rock and blues guitarist. He is primarily known for his work with Whitesnake, having written or co-written with David Coverdale many of the group's hit songs, such as "Fool for Your Loving", "Walking in the Shadow of the Blues", "She's A Woman", "Lovehunter", "Trouble", "Child of Babylon", "Rough and Ready", and the multi-million selling chart-topper "Here I Go Again".


After playing with local Buckingham based groups. Bernie formed Skinny Cat at the age of 17, Marsden got his first professional gig with UFO in 1972. He next played with Glenn Cornick's Wild Turkey in 1973, before he joined drummer Cozy Powell's band Cozy Powell's Hammer. He then joined Babe Ruth in 1975, and played on two releases for Capitol Records, Stealin' Home and Kid's Stuff , during his time with Babe Ruth Cozy Powell recommended him to Jon Lord who was forming a post Deep Purple band with Ian Paice Paice Ashton Lord in 1976, with Tony Ashton .


During his time recording the Malice in Wonderland album with Paice Ashton Lord, Marsden worked alongside saxophonist Howie Casey who recommended Bernie to join Paul McCartney's Wings, but the position never materialised as Whitesnake was being formed at the same time period.


PAL was the band formed by Jon Lord and Ian Paice after the demise of Deep Purple, long time associate and keyboard player Tony Ashton made up the third part, writer of 'The Resurrection Shuffle' Cozy Powell recommended Marsden, he auditioned alongside bassist Paul Martinez. There was much anticipation for the band, but after one LP and only five gigs, the band folded during sessions in Munich for a second album, momentous because it was in Munich that Marsden met David Coverdale for the first time.


After Paice Ashton Lord folded, in 1978, Marsden formed a new band with former Deep Purple vocalist David Coverdale and guitarist Micky Moody. The band started as David Coverdale's Whitesnake, which then became Whitesnake. Bernie played on the first e.p, first five albums and a live album: Snakebite , Trouble , Lovehunter , Ready & Willing , Live In The Heart Of The City , Come An' Get It and Saints & Sinners .Contributing many of the songs with David Coverdale and sometimes Moody. Marsden and Coverdale would go on to create Whitesnake's anthem "Here I Go Again" in 1982, a song that sold many millions all over the world in on Whitesnake '1987'. Both writers have received many awards for the song. As of 2018 the song has been counted at 6 million USA radio plays.


Following his departure from Whitesnake, Marsden formed a short-lived band called Bernie Marsden's SOS. Not long after, Bernie Marsden's Alaska was formed with Robert Hawthorne on vocals and Richard Bailey on keyboards. Alaska released two melodic rock albums, Heart of the Storm and The Pack , before splitting. In 1986, he put together MGM with former-Whitesnake members Neil Murray and his replacement guitarist in Whitesnake Mel Galley. The band, very briefly, also included former Toto vocalist Bobby Kimball. Recordings were made but still remain unreleased. In 1989, Bernie Marsden reunited with Whitesnake guitarist Moody to form The Moody Marsden band, recording an acoustic live album in Norway called 'Live In Hell' and an electric live album recorded in England 'Never Turn Our Back On The Blues' that featured Zak Starkey on drums. Touring throughout Europe, recording one studio album called 'Real Faith'. Next up for Bernie was The Company Of Snakes. As it turned out, the name was a little misleading as former Bad Company vocalist Robert Hart didn't actually make the record with the others, Marsden, Moody and Neil Murray with John Lingwood playing drums decided to continue. This band eventually released a double-album of Whitesnake songs called 'Here They Go Again', and later produced a studio album called 'Burst The Bubble' that also featured ex Hammer and Rainbow and now Deep Purple keyboard player Don Airey. TCOS ended and evolved into M3. This revamped line up included Bernie, Moody, and Murray, all ex Whitesnake and master drummer Jimmy Copley, keyboard player Mark Stanway and Swedish vocalist Stefan Berggren. M3 produced a triple-CD DVD called 'Rough 'n' Ready' which again features the songs from their Whitesnake legacy.


This article uses material from the Wikipedia article "Bernie Marsden", which is released under the Creative Commons Attribution-Share-Alike License 3.0.