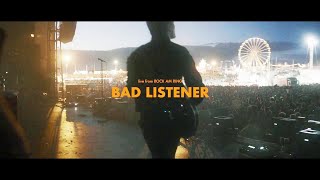 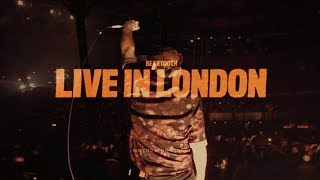 Beartooth - The Lines (Live from London) [Re-Live at Home] 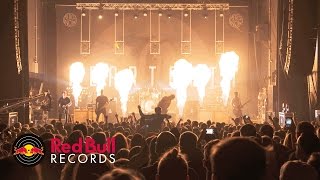 
Beartooth is an American hardcore punk band formed by Caleb Shomo in Columbus, Ohio, United States, in 2012. They have been signed to Red Bull Records since 2013. Their debut EP Sick was released on July 26, 2013, followed by their debut full-length album Disgusting on June 10, 2014. Their second album Aggressive was released on June 3, 2016. Their third album Disease was released on September 28, 2018.


Caleb Shomo began writing Beartooth songs while he was still in Attack Attack!. His project was originally called "Noise," but was switched to Beartooth upon realization the name was already taken. He named the band after Bear Tooth Court, where their original bassist Nick Reed grew up. Shomo has stated that Beartooth was supposed to be a mere distraction while he was still a member of Attack Attack! and nothing beyond that, having no intentions to record or play live music; however, after his departure from Attack Attack!, he then focused on the project and admitted that this band has surpassed his wildest expectations and has done everything he has ever wanted to do. He recruited guitarist Taylor Lumley, bassist Nick Reed, and drummer Brandon Mullins for live performances.


Shomo said that "Set Me on Fire" was the first Beartooth song ever written, followed by "I Have a Problem". These songs, as well as "Go Be the Voice" and "Pick Your Poison", were released online in December 2012. After uploading a live music video for "I Have a Problem", Beartooth announced a string of one-off dates that brought them right into fans living rooms, mostly in the Midwest, following the buzz surrounding the band's live performance in the "I Have a Problem" live video. They played a date on the 2013 Vans Warped Tour and were featured on the entire 2015 tour.


On June 7, 2013, Shomo announced that Beartooth was now signed to Red Bull Records. They released their debut EP Sick for free on their website on July 26, 2013, with Shomo singing, producing and playing all instruments on the record. On August 17, 2013, the band released a video for "I Have a Problem", not to be confused with the earlier live version. On December 18, 2013, the band were confirmed for the Warped Tour 2014. On November 14, the band released a music video for the song "Go Be the Voice".


On January 6, 2014, Kamron Bradbury, formerly of City Lights was announced as the new rhythm guitarist. In early 2014, Nick Reed left Beartooth and was replaced with Oshie Bichar of City Lights for a U.S. tour with Memphis May Fire throughout February and March.


On April 29, 2014, Beartooth released a live music video for their new song, "Dead" set to appear on their forthcoming album, Disgusting. On May 13, 2014, it was announced through Facebook the release date for the debut full-length album, Disgusting, as June 10, 2014, along with its track listing. The first single for the album was released on the same day, titled "Beaten In Lips", along with its music video. The album was available to stream online a day before its release. As with Beartooth's debut EP, Shomo sung, produced, and played all instruments on Disgusting, except for "In Between", co-produced by John Feldmann.


This article uses material from the Wikipedia article "Beartooth", which is released under the Creative Commons Attribution-Share-Alike License 3.0.