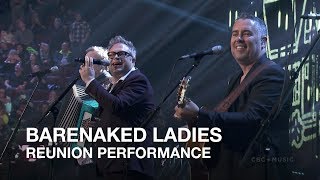 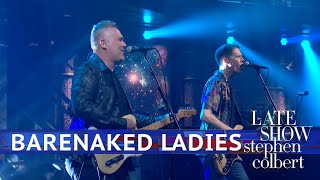 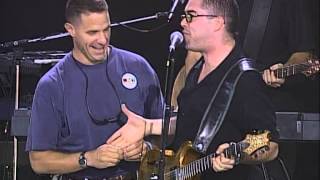 Barenaked Ladies is a Canadian rock band formed in 1988 in Scarborough, Ontario. The band developed a cult following in Canada, with their self-titled 1991 cassette becoming the first independent release to be certified gold in Canada. They reached mainstream success in Canada when their debut with Reprise Records, Gordon, featuring the singles "If I Had $1000000" and "Brian Wilson", was released in 1992. The band subsequently translated this into U.S. success beginning with versions of "Brian Wilson" and "The Old Apartment" off their 1996 live album Rock Spectacle followed by their 1998 fourth studio album Stunt which was ultimately their breakout success. The album featured their highest-charting hit, "One Week" as well as "It's All Been Done". Their followup fifth album, Maroon also charted highly featuring the lead single "Pinch Me". In the 2010s, the band became well-known for creating the theme song for the sitcom "The Big Bang Theory".


Initially a duo of Ed Robertson and Steven Page,, the band quickly grew to a quintet adding brothers Jim and Andy Creeggan and Tyler Stewart by 1990. Andy Creeggan left the band in 1995 and was replaced by Kevin Hearn. Page left in 2009, reducing the group to a quartet.


The band's style has evolved throughout their career, and their music which began as exclusively acoustic quickly grew to encompass a mixture of an array of styles including pop, rock, hip hop, rap, etc. The band's live performances feature comedic banter and free-style rapping between songs. They have won multiple Juno Awards and have been nominated for two Grammy Awards. The group has sold over 15 million records, including albums and singles, and were inducted into the Canadian Music Hall of Fame in March 2018.


Barenaked Ladies began as the duo of Ed Robertson and Steven Page. The two went to school together since Robertson was in grade four at Churchill Heights Public School, but were not friends until they met each other at a Harvey's restaurant following a Peter Gabriel concert. Each was pleased to find that the other liked Gabriel; they began talking and found they had many of the same tastes. The two became friends and bonded further when they were both counsellors at Scarborough Music Camp located in McKellar, Ontario. They would play songs together, and Steve was impressed by Ed's ability to harmonize.


When Page had an extra ticket to a Bob Dylan concert at Exhibition Stadium, he asked Robertson to join him. Bored by the show, the two turned to amuse each other, pretending they were rock critics, inventing histories and comments about the Dylan band. They also made up various fictional band names, one of which was "Barenaked Ladies".


On another front, Robertson had agreed to perform with his cover band in a battle of the bands at Nathan Phillips Square for the Second Harvest food bank. The band broke up, and he forgot about the gig. When Robertson received a phone call a week before the show, asking him to confirm the gig, he improvised that the name of the band had changed to "Barenaked Ladies", recalling the name from the Dylan concert. He then called Page and asked if he wanted to do the gig; Page reportedly could not believe Robertson had given that name. They arranged three rehearsals and missed them all. The two played the show on October 1, 1988, but instead of competing, they played while the other bands set up, playing every song they could think of that they both knew. The show went well, and they were invited to open a show for another well-known local band, The Razorbacks, at the Horseshoe Tavern the coming weekend. They set up three more rehearsals, and again missed them all; they proceeded to improvise their set once again. These acts would set a precedent for an element of Barenaked Ladies concerts, which still almost always contain some improvised raps or songs, as well as general improvised banter.


Page and Robertson continued performing and also began writing songs together. The band's first tape, Buck Naked , was made using a four-track recorder in basements and bedrooms. The pair became followers of comedy group Corky and the Juice Pigs, to whom they give credit for exposing them to the idea of comedic stage presence. Page and Robertson presented the group with their tape and were invited to open for the Juice Pigs on their cross-Canada tour. One night, in Toronto, Page and Robertson invited their friends, brothers Andy Creeggan and Jim Creeggan , whom they knew from music camp, to play with them at a Christmas time club show. Barenaked Lunch was released in 1990 and featured the two new band members. The tape had problems, however, as it was mastered incorrectly and played too fast.


This article uses material from the Wikipedia article "Barenaked Ladies", which is released under the Creative Commons Attribution-Share-Alike License 3.0.