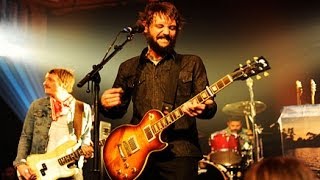 About Band of Horses


Band of Horses is an American rock band formed in 2004 in Seattle, Washington by Ben Bridwell. The band has released five studio albums, including 2010's Grammy-nominated Infinite Arms. The band's lineup, which included Mat Brooke for the debut album, has undergone several changes. The most-recent lineup of Bridwell, Ryan Monroe, Tyler Ramsey, Bill Reynolds, and Creighton Barrett, was together several years and recorded three albums. That lineup ceased when Ramsey and Reynolds departed in 2017.


Ben Bridwell formed Band of Horses, who were originally briefly known as Horses, in 2004 after the break-up of his previous band, Carissa's Wierd, along with bassist Chris Early and drummer Tim Meinig. They were soon joined by former Carissa's Wierd bandleader Mat Brooke . The band initially received attention from Sub Pop after opening for Iron & Wine during Seattle area shows. In 2005, the band released the Tour EP, which was sold at shows and on Sub Pop's website.


Their first full-length album, Everything All the Time, was recorded in 2005 with producer Phil Ek and released by Sub Pop on March 21, 2006. It features the band's original four-piece lineup, although both Tim Meinig and Sera Cahoone receive drumming credits. The album included new versions of five of the six songs from the Tour EP along with five brand new songs. It was a minor hit in Scandinavia, entering the lower reaches of the Sweden and Norway album charts. Ben Bridwell explained the sound of the album, "I thought before recording that I really wanted an ELO-sounding record, with strings and keyboards and synths, but then, as we got closer to it, we wanted to take a more raw approach."


Bridwell found that there was a personality clash between himself and Meinig and Early and the two left soon after the recording of the album. Ben explained his side of the story, "All of a sudden I was...with two guys I didn't really even know...they were nice guys, there just wasn't a personality match." For the subsequent tour, Joe Arnone , Rob Hampton and Creighton Barrett were brought in to play with Bridwell and Brooke.


Everything All the Time's first single was "The Funeral", which has been used in numerous television series, films, video games, and advertisements. On July 13, 2006, the band performed the song on the Late Show with David Letterman without Brooke, who had left the band. Subsequently, he formed Grand Archives, who have since signed to Sub Pop and released two albums. Brooke explained how he joined Band of Horses, "So they ended up getting a show opening up for Iron and Wine in Seattle and Ben asked if I would just come up and do a couple songs, just 'cause we're friends. So...I did that. It was fun and then a couple of Iron and Wine tours came up...and then next thing I knew, we were in the studio making a record for Sub Pop." On why he left, he said, "I'd never really given the commitment to be a formal member. It was just a spur of the moment...and Everything All the Time took off really fast...I still didn't feel quite committed. It was still 100 percent Ben's project and I kinda wanted to see what else I could do."


Before recording their second album, Bridwell decided to relocate the band from Seattle to his native South Carolina. He said, "We were touring so much that nowhere was really home, so I figured...if I'm gonna come home after these long stretches of traveling, it would nice to be around my family."


This article uses material from the Wikipedia article "Band of Horses", which is released under the Creative Commons Attribution-Share-Alike License 3.0.