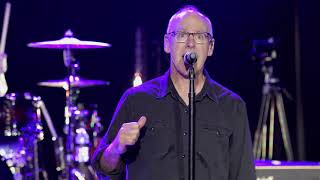 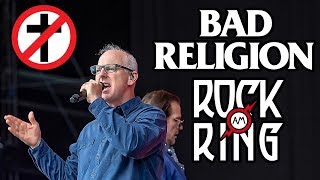 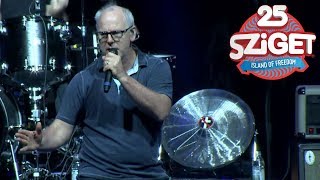 
Bad Religion is an American punk rock band that formed in Los Angeles, California, in 1980. The band's lyrics cover topics related to religion, politics, society, the media and science. Musically, they are noted for their melodic sensibilities and extensive use of three-part vocal harmonies. The band has experienced multiple line-up changes, with singer Greg Graffin being the band's only constant member, though fellow founding members Jay Bentley and Brett Gurewitz have also been with the band for most of their history while guitarist Brian Baker has been a member of the group since 1994. Guitarist Mike Dimkich and drummer Jamie Miller have been members of the band since 2013 and 2015 respectively. To date, Bad Religion has released seventeen studio albums, two live albums, three compilation albums, three EPs, and two live DVDs. They are considered to be one of the best-selling punk rock acts of all time, having sold over five million albums worldwide.


After gaining a large underground following and critical praise through their releases on Gurewitz's label Epitaph in the 1980s and early 1990s, Bad Religion experienced mainstream success after signing to the major label Atlantic in 1993 and, along with California-based bands like Green Day and Epitaph-signed acts such as The Offspring, NOFX and Rancid, the band was responsible for the punk rock revival movement of the 1990s. Atlantic reissued the previously-released-on-Epitaph album, Recipe for Hate , which became commercially successful, as did its 1994 follow-up Stranger than Fiction.Stranger than Fiction included some of Bad Religion's well-known hits, including "Infected," "Stranger than Fiction," and the re-recorded version of "21st Century "; the album was later certified gold in both the United States and Canada.


Shortly before the release of Stranger than Fiction, Gurewitz left Bad Religion to run his label Epitaph on a full-time basis , and was replaced by Brian Baker. The band's success had slowly dwindled by the late 1990s, and, after three more albums, they were dropped from Atlantic in 2001. This resulted in Bad Religion returning to Epitaph and Gurewitz rejoining the band. Since then, they have undergone a resurgence in popularity, with "Sorrow," "Los Angeles Is Burning," and "The Devil in Stitches" being Top 40 hits on the US charts while their sixteenth studio album, True North , became Bad Religion's first album to crack the top 20 on the Billboard 200 chart where it peaked at number 19. The band's seventeenth and most recent studio album, Age of Unreason, was released on May 3, 2019.


In 1981, the band released their initial eponymous six-song EP as a 7" record on the newly formed label, Epitaph Records, which was and continues to be managed and owned by Gurewitz. Also in 1981, the band began recording their first full-length album, How Could Hell Be Any Worse? During the recording of this album, drummer Jay Ziskrout quit the band, and was replaced by Pete Finestone. Released in 1982, How Could Hell Be Any Worse? was also distributed by the band under the Epitaph label, and sold roughly 12,000 copies.


In 1983, the band released Into the Unknown, a keyboard-driven progressive hard rock album with a slightly slower pace. Almost all of the albums the band produced were sold out of the warehouse they were housed in without the band's knowledge, after which this album went out of print. This incident, as well as band members' increasingly divergent personal lives, led to the band's temporary dissolution shortly after the album's release.


This article uses material from the Wikipedia article "Bad Religion", which is released under the Creative Commons Attribution-Share-Alike License 3.0.