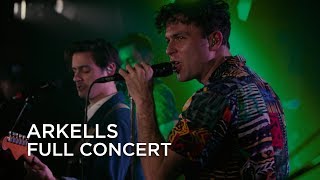 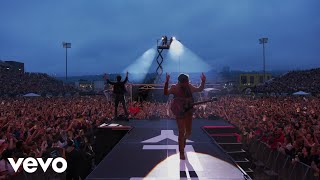 Arkells - Knocking At The Door (Live At The Rally)
Share Concert

Arkells is a Canadian rock band, formed in Hamilton, Ontario. In 2006, they signed with Dine Alone Records, and have since signed with Universal Records Canada and Last Gang Records. They are managed by Last Gang Management. They have released six albums, two EPs and a number of singles that have charted in Canada. The band has won multiple Juno Awards, including one for their album High Noon in 2015. The band headlined the 108th Grey Cup halftime show in Hamilton, Ontario on December 12, 2021.


During their first few live shows the band called themselves Charlemagne but changed their name when another band of the same name threatened to sue them. The band is named after Arkell Street in the Westdale neighbourhood of Hamilton, near McMaster University, where they lived and would practice their music. All five original band members attended McMaster where lead singer Max Kerman graduated with an honours BA in Political Science. Kerman met guitarist Mike DeAngelis at a McMaster Welcome Week event where the two discovered they had an identical taste in music.


Arkells' debut album Jackson Square was released 28 October 2008 on Dine Alone Records. In late 2008, Arkells toured Canada as opening act for Matt Mays & El Torpedo. Later that year, on November 22, they performed the halftime show at the Vanier Cup in their hometown. In early 2009 they toured with Waking Eyes across Canada. Arkells were featured on Aux.tv's Alt Sessions where they performed their full EP.


In October, 2009, Arkells won a favourite new artist CASBY Award from Toronto radio station 102.1 The Edge at a ceremony and concert at Toronto's Kool Haus. The band also performed at the event.


In April 2010, Arkells won the Juno Award for New Group of the Year, and on May 15, 2010, were picked to open for Them Crooked Vultures at the Air Canada Centre in Toronto.


They made headlines while playing a set at Horseshoe Tavern in Toronto after the 2010 Much Music Video Awards, when rapper Shad and pop singer Kesha joined them onstage to freestyle and sing along during a cover of Ms. Jackson by Outkast.


In 2011, the band wrote and recorded their second album Michigan Left, which was released on October 18 of that year. The first single, "Whistleblower", was released to iTunes on July 5, 2011. "Whistleblower" has also been used as the Intro Music to the 2011–2012 Calgary Hitmen hockey team and featured in EA Sports' NHL 13 video game. The band also released a second song, "Kiss Cam", in July.


This article uses material from the Wikipedia article "Arkells", which is released under the Creative Commons Attribution-Share-Alike License 3.0.