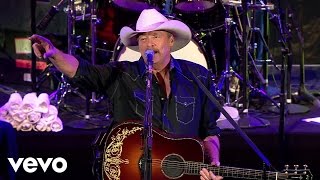 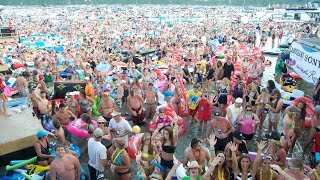 
Alan Eugene Jackson is an American singer and songwriter. He is known for blending traditional honky-tonk and mainstream country pop sounds , as well as penning many of his own songs. Jackson has recorded 16 studio albums, three greatest hits albums, two Christmas albums, and two gospel albums.


Jackson is one of the best-selling music artists of all-time, having sold over 75 million records worldwide, with 44 million sold in the United States alone. He has had 66 songs appear on the Billboard Hot Country Singles & Tracks chart; of the 66 titles, and six featured singles, 38 have reached the top five and 35 have claimed the number one spot. Out of 15 titles to reach the Billboard Top Country Albums chart, nine have been certified multi-platinum. He is the recipient of two Grammy Awards, 16 CMA Awards, 17 ACM Awards and nominee of multiple other awards. He is a member of the Grand Ole Opry, and was inducted into the Georgia Music Hall of Fame in 2001. He was inducted into the Country Music Hall of Fame in 2017 by Loretta Lynn and into the Nashville Songwriters Hall of Fame in 2018.


Jackson was born to Joseph Eugene "Daddy Gene" Jackson and Ruth Musick "Mama Ruth" Jackson in Newnan, Georgia, and has four older sisters. He and his immediate family lived in a small home built around his grandfather's old toolshed. The family is primarily of English descent. His mother lived in the home until she died on January 7, 2017. He began writing music in 1983. Growing up, Jackson listened primarily to gospel music, until a friend introduced him to Gene Watson, John Anderson, and Hank Williams Jr. Jackson attended the local Elm Street Elementary and Newnan High School, and joined the band, Dixie Steel after graduation. When he was 27, Jackson and his wife of six years, Denise, moved from Newnan to Nashville, Tennessee, where he hoped to pursue music full-time. In 1987, Jackson cut an album titled New Traditional at Doc's Place in Hendersonville, Tennessee, but it is extremely rare and was only released in Japan.


In Tennessee, Jackson got his first job in The Nashville Network's mailroom. His wife Denise was a flight attendant. While working she came in contact with Glen Campbell and requested advice for her husband. Campbell handed her his business card of his manager and told her to call, which helped jumpstart his career. Jackson eventually signed with Arista, and in 1989, he became the first artist signed to the newly formed Arista Nashville branch of Arista Records. Arista released Jackson's debut single, "Blue Blooded Woman", in late 1989. Although the song failed to reach top 40 on Hot Country Songs, he reached number three by early 1990 with "Here in the Real World". This song served as the title track to his debut studio album, Here in the Real World, which also included two more top five hits and his first number one, "I'd Love You All Over Again".Don't Rock the Jukebox was the title of Jackson's second album. Released in 1991, it included four number-one singles: the title track, "Someday", "Dallas" and "Love's Got a Hold on You", and the number three "Midnight in Montgomery". Jackson also co-wrote several songs on Randy Travis' 1991 album High Lonesome.


A Lot About Livin' , his third album, accounted for the number one hits "She's Got the Rhythm " and "Chattahoochee", plus the top five hits "Tonight I Climbed the Wall", "Mercury Blues" and " You Can't Have It All". "Chattahoochee" also won him the 1994 Country Music Association awards for Single and Song of the Year. In 1994, Jackson left his management company, Ten Ten Management, which had overseen his career up to that point, and switched to Gary Overton. His fourth album was titled Who I Am, and it contained four number one hits: a cover of the Eddie Cochran rockabilly standard "Summertime Blues", followed by "Livin' on Love", "Gone Country" and "I Don't Even Know Your Name". An additional track from the album, a cover of Rodney Crowell's "Song for the Life", made number six. In late 1994, Clay Walker reached number one with "If I Could Make a Living", which Jackson co-wrote. Jackson also appeared in the 1996 "When Harry Kept Delores" episode of Home Improvement, performing "Mercury Blues".


The Greatest Hits Collection was released on October 24, 1995. The disc contained 17 hits, two newly recorded songs , and the song "Home" from Here in the Real World that had never been released as a single. These first two songs both made number one. Everything I Love followed in 1996. Its first single, the Tom T. Hall-penned "Little Bitty", took Jackson to the top of the charts in late 1996. The album also included the number one hit "There Goes" and a number two cover of Charly McClain's 1980 single "Who's Cheatin' Who". The album's fifth single was "A House with No Curtains", which became his first release since 1989 to miss the top 10.


This article uses material from the Wikipedia article "Alan Jackson", which is released under the Creative Commons Attribution-Share-Alike License 3.0.