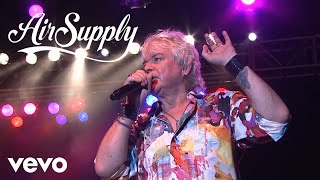 Air Supply - All Out Of Love (Live in Hong Kong) 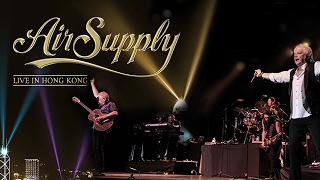 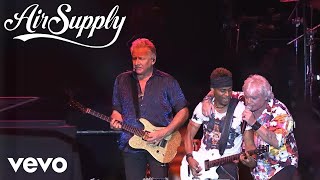 
Air Supply is an English-Australian soft rock duo formed in Australia consisting of English-born singer-songwriter and guitarist Graham Russell and Australian lead vocalist Russell Hitchcock. They had a succession of hits worldwide, including eight top-ten hits in the United States in the early 1980s. They formed in 1975 and have included various accompanying musicians and singers. The Australian Recording Industry Association inducted Air Supply into their Hall of Fame on December 1, 2013 at the annual ARIA Awards.


Chrissie Hammond, Russell Hitchcock, and Graham Russell met on May 12, 1975 while performing in the Australian production of the Andrew Lloyd Webber and Tim Rice musical Jesus Christ Superstar. With Hammond and Hitchcock on vocals and Russell on guitar, they formed a harmony vocal group in Melbourne, while the show was still playing. Hammond left the vocal group to form Cheetah and was replaced by Jeremy Paul on bass guitar and vocals in 1976. Together, Hitchcock, Russell and Paul formed Air Supply. The group's first single, "Love and Other Bruises", was released in November 1976 and peaked at No. 6 on the Australian Kent Music Report Singles Chart in January 1977. It was followed by Air Supply, their debut album, in December, which reached No. 17 on the Kent Music Report Albums Chart and achieved gold in Australia. The album was produced by Peter Dawkins with Air Supply line-up as Hitchcock, Paul, Russell and drummer Jeff Browne, guitarist Mark McEntee and keyboardist, arranger Adrian Scott. Other singles were "If You Knew Me", "Empty Pages" and "Feel the Breeze" but none reached the Top 40. A national tour followed with Hitchcock, Paul, Russell and Scott joined by Nigel Macara on drums and Brenton White on guitar. Brenton White rehearsed but did not perform with Air Supply.


Their second album, The Whole Thing's Started, also produced by Dawkins, was released in July 1977 with White replaced on lead guitar by Rex Goh. The album spawned the singles "Do What You Do" , "That's How the Whole Thing Started" and "Do It Again" but neither album nor singles charted into the Top 40. From late 1977, the group supported Rod Stewart during his tour of Australia—he invited them to continue to the United States and Canada. Their third album, Love & Other Bruises, which included re-recordings of some earlier tracks, was made mid-tour in Los Angeles in July–August and released later that year in the US on Columbia Records with Jimmy Horowitz producing. During the tour, Paul left the band, resulting in a new line-up of Hitchcock, Macara, Goh, and Russell, plus Joey Carbone on keyboards, Robin LeMesurier on co-lead guitar and Howard Sukimoto on bass guitar. Paul, in 1980, would recruit fellow former Air Supply bandmate McEntee in the line-up of Divinyls, fronted by Chrissie Amphlett. Air Supply performed in London supporting Chicago and Boz Scaggs.


Although their music had some commercial success, Russell claimed, on a 1995 DVD, that he and Hitchcock were so poor that they checked the backs of hotel sofas for change so that they could buy bread to make toast. By early 1978, the line-up was Hitchcock, Russell, and Macara with George Terry and Joey Murcia on guitar, George Bitzer on keyboards and Harold Cowart on bass guitar. However, by mid-1978, only Hitchcock and Russell remained in the line-up, backed by Ralph Cooper on drums and former Sailor members Brian Hamilton on bass guitar and vocals and David Moyse on guitar.


In April 1979, the band released Life Support, a concept album which included a picture disc on its first printing. The album was recorded at Trafalgar Studios in Sydney. The album had a five-and-a-half-minute version of "Lost in Love", written by Graham Russell in 15 minutes; it was released as a single and peaked at No. 13 in Australia and No. 13 in New Zealand. The track caught the attention of Arista Records boss Clive Davis, who remixed the song and released it as a single in the US early the next year. In late November 1979 Russell was embroiled in a bitter court case with Samuel Nay over accusations of assault at a backstage meet and greet in Oklahoma. Nay would later die during the court case and all charges were dropped. The line-up for the album kept Hitchcock, Russell, Cooper, and Moyse, and added Criston Barker and Frank Esler-Smith with help from other session musicians. Esler-Smith had previously known Hitchcock and Russell from working with them in Jesus Christ Superstar.


A re-recorded and remixed version of "Lost in Love" was released internationally as a single in January 1980 on Arista Records. The associated album, Lost in Love, appeared in March and contained three US Top 5 singles, including the title track which peaked at No. 3 on the Billboard Hot 100. The other US Top 5 singles were "Every Woman in the World" and "All Out of Love" . Both singles were Top 10 hits in Australia with "All Out of Love" reaching No. 17 in the Netherlands and reaching No. 11 on the United Kingdom Singles Chart. The album kept the same line-up as before, with Hitchcock, Russell, Cooper, Moyse, Barker and Esler-Smith. The album sold three million copies in the US and peaked at No. 22 on the Billboard 200.


This article uses material from the Wikipedia article "Air Supply", which is released under the Creative Commons Attribution-Share-Alike License 3.0.